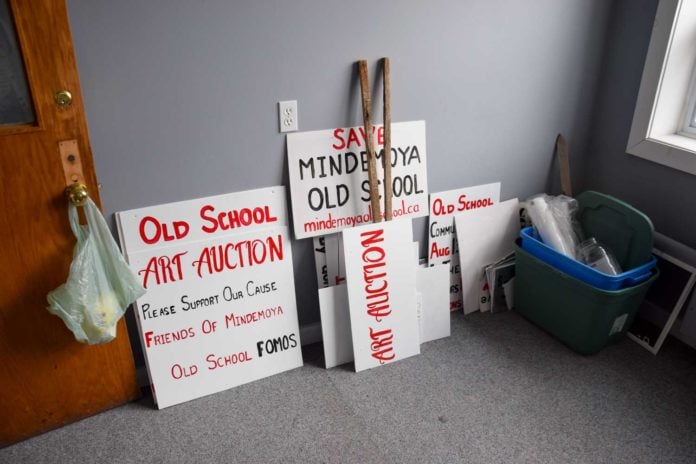 MINDEMOYA—First impressions are important. Friends of the Mindemoya Old School held an open house recently aimed at dispelling rumours and misconceptions about the venerable building they felt were circulating in the community.

“Today we are opening up to the public so that they can come in and take a look at what really is going on,” said Allison McAllister. “Over the last year-and-a-half there is a lot of fearmongering, I call it ‘asbestos mongering’ and I think there is a lot of bad information out there. So, we want people to come in and see that it is not as bad as people are being led to believe.”

Ms. McAllister pointed to the main floor which she described as “almost operational.”

There are a number of “big things” that do have to be dealt with. Ms. McAllister gave the example of the heat plant, which is a combination of an out-dated oil boiler and forced air systems. “It’s very inefficient,” she said. “We have to bring in a more efficient heating system and bring in some more insulation. We need something more economical and sustainable over time.”

Plans are to eventually lease out space on the main floor to artists and artisans. “We conducted a number of surveys that indicated a lot of interest, a seniors’ survey and a creative hub survey,” said Ms. McAllister. Among the questions on the creative hub survey was what they wanted in a space, what type of space they wanted and if they were willing to stay long term, she said. “Obviously, we want them to be here for a long time for their security and ours and the building’s security over the long-term.”

“If this doesn’t happen there will never be another opportunity again on the Manitoulin Island,” she said. “There is no building anywhere. Nobody is going to spend the money to build a building for this purpose, if they did it wouldn’t be this big.”

Ms. McAllister said that this is good opportunity to be able to give back to the community. “Make it an asset that’s worth having in here, increase tourism, increase incomes for our artists and artisans,” she said.

The lower level, which is almost equally as bright as the upper level with big windows downstairs, will be a seniors’ centre. “We got a lot of feedback from seniors on what they want to see in a centre,” she said. “That is what we would like to deliver. Not just providing them with a room, engaging programing for our seniors. We provide the training opportunities, the guest speakers to come and talk about what they want.”

Ms. McAllister said that seniors have a lot of life experience and a lot to offer the community.

The Mindemoya Old School has cleaned up nicely since the last time The Expositor came to visit, even without any major renovations. Ms. McAllister pointed out that more than just the bones of the building are sound, and the tour bore that claim out.

Supporters and curious members of the public could be seen wandering through the hallways and rooms of the upper level asking questions of the FOMOS volunteers on hand. In one room, a set of tables were set up with fundraising merchandise available. A book written about the Mindemoya Old School by Joanne and Jim Smith ‘Tales from the Old School’ were on hand, as well as hand-thrown bespoke FOMOS-themed pottery mugs—each were being quickly snapped up. The last of the current mugs sold while The Expositor was onsite.

“We will be getting more mugs in,” said Ms. McAllister, “but the new ones will be slightly different.”

FOMOS members fought a hard-won campaign for the opportunity to re-purpose the historic old building, facing strong initial opposition from several members of municipal council. The failure of a funding application to build a new multi-purpose complex near the site to win approval from granting agencies provided FOMOS with some breathing room and they were eventually able to win over enough councillors for the building to, literally, get a new lease on life when council agreed to let the building to FOMOS following the development of a business plan aimed at sustainable operation of a community centre.