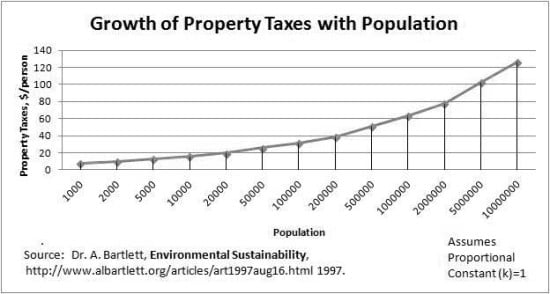 Council of Central Manitoulin has proposed a Community Improvement Plan (CIP) which takes property tax revenue and gives it to certain property owners and/or developers to encourage them to improve their property.

Tax money used by CIP is therefore not available for spending elsewhere. Perhaps we can get some additional money from the province or federal government to add to the local tax dollars, but there will still be some impact on other local spending.

On reading the draft CIP, I see that the consultant’s proposal recommends using the CIP to achieve or assist municipal growth. The following graph shows the probable consequences of that growth: increasing property taxes.

The graph shows that with growth, the demand for municipal services always increases more rapidly than the ability to pay for those extra demands. That means the per capita taxes (ie. dollars/person in the municipality) will increase far faster than the resulting population increase. The draft CIP for Central Manitoulin, as it is currently written, dooms us to the same fate and path as Sudbury, Muskoka, and Toronto.

I believe most taxpayers feel property taxes are already too high, and fear further increases. We don’t need a CIP if it will act as a “turbo charger,” increasing property taxes at an even higher rate.

Prosperity doesn’t necessarily occur because of growth. Growth never pays for itself. Growth creates some jobs initially, but the cost of the growth eventually kills more local jobs than it created, due to the increased taxes and unaffordable housing costs. We want sustainable jobs for our Manitoulin youth. Growth destroys and/or prevents sustainability.

Growth tends to be a sneaky way to privatize profits while placing most of the resulting costs onto the public purse. The developers are almost always the winners from growth. Everybody else gets stuck with the developer’s bills, forced to pay for the developer’s growth-induced profits.

If people want growth and the resulting never-ending increases in municipal taxes, the best choice would be to live in Sudbury, Muskoka, or Toronto.

Almost all growth is bad. There are alternatives to being addicted to municipal growth.

As long as the proposed CIP is not directly or indirectly used to encourage growth, and we are prepared for higher taxes or less spending in other areas, then I believe a well written, well executed CIP can be good for our community.