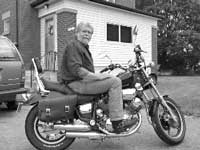 Glenn Thomas James Newman, a resident of Manitowaning, died peacefully at Health Sciences North, Sudbury on Saturday, March 14, 2015 at the age of 60. Born to June (nee Moggy) and Beverly Newman, (both predeceased) at Little Current, on October 20, 1954. Proud father of Keith and Allan (wife Giovana). Loving grandpa of Katelyn and Gerald. Dear brother of Pam (husband Bob Hallet predeceased), Bob (wife Brenda), Dan (wife Rhonda), Perry (wife Gena), Caroline (husband Steve Kane). Will always be remembered by his nieces, nephews and friends. Glenn served his country with the Canadian Armed Forces for several years before leaving to start a family and raise his two sons Keith and Allan, while working in the underground mines in Sudbury, Uranium City, Saskatchewan and Elliot Lake. Glenn then left underground mining and moved to southern Ontario and worked in various business sectors with Schneider Meats, Campbell Soups and National Cash Register, before coming home to Manitoulin and finishing out his work career at the Lafarge Quarry, where health issues dictated an early retirement. Some of Glenn’s passions were motorcycling rain or shine, fishing for the sport and the craving of fresh fish that honed his cooking skills. Glenn also enjoyed watching Nascar and was an avid reader of many books of history, mystery and science fiction. Glenn’s love for his family was endless, most proud of his two sons and the blessing of his first grandchild Katelyn and Gerald shortly after. Glenn had many pets throughout the years, where dogs were always a constant companion, with Izzy always in Glenn’s lap. Cremation with Memorial Service at 11 am on Wednesday, March 18, 2015 at Island Funeral Home. Burial at a later date in Hilly Grove Cemetery. Donations in Glenn’s memory to Northern Cancer Foundation or to Daffodil Terrace (you can donate on line at) www.canadahelps.org/en/charities/the-northern-cancer-foundation/ or to Northern Diabetes Health Network (Little Current Site) would be greatly appreciated. If you would like to make a donation, you may do it online or bring a cheque payable to the charity of your choice. Record your thoughts, memories and photos at www.islandfuneralhome.ca. Arrangements entrusted to Island Funeral Home, Little Current.