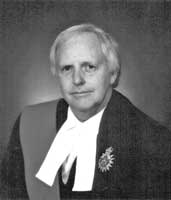 Ian McDougall Gordon passed away March 12, 2015 in his home on Lake Temiskaming, surrounded by his family, after a three-year battle with cancer. Born September 17, 1938 in Gore Bay, Ontario. Predeceased by his parents, William Ronald Gordon and Elizabeth Gordon [McDougall]. Survived by his high school sweetheart and wife, Barbara Anne (nee McCannell); children Paul (Bev), Robbie (Laurie) and Tammie Caldwell (Terry); and grandchildren: Taylor, Shane, Rebecca, Nick and Ben. Also survived by brother Douglas Gordon (Helen) and Barbara’s sister Nancy Clark, all of Gore Bay, and many nieces and nephews. Ian graduated from Gore Bay High School and attended Victoria College (U of T) in 1957. In 1959, he enrolled at Osgoode Hall Law School. He was called to the bar in 1963 and began practicing law with Evans Bragagnolo Sullivan and Gordon in Timmins, Ontario. In 1968, he joined Dalton Dean QC in Haileybury. He was appointed Queen’s Counsel in 1976 and was certified as a Specialist in Civil Litigation by the Law Society of Upper Canada in 1989; appointed to Ontario Court (General Division) in 1991, where he became a very well respected jurist; appointed Regional Senior Judge for the North East Region of the Ontario Superior Court of Justice from 1998 to 2003; retired April 2011. Ian was an active member of the community of Haileybury. A hockey enthusiast, in 1971 Ian helped establish the Haileybury 54s Juvenile Hockey Club. He was an active member of the Haileybury Golf Club and the Cobalt-Haileybury Curling Club, and an ardent supporter of children’s sports and activities – especially those of his beloved grandchildren. A great friend and advocate, Ian was happiest at his camp or at the helm of his many Q-Sea iterations. The Gordon family wishes to extend its gratitude and appreciation on Ian’s behalf to Dr. Logan, Dr. Lopez, Lynn Baldovin, and the team at the Community Care Access Centre. The Gordon family welcomeed friends at the Buffam Leveille Funeral Home on Sunday, March 15, 2015 from 2 pm to 4 pm and 7 pm to 9 pm. Funeral services were held on Monday, March 16, 2015 at 1 pm from St Paul’s United Church, 70 Wellington Street, New Liskeard, Ontario. Reverend Judith Visser officiating. Spring interment will take place at Mount Pleasant Cemetery, Haileybury. In lieu of flowers, the Gordon family asks you to consider a donation to the Northern Cancer Foundation [cheques only] or a charity of your choice. Condolences, contributions and memorial candles may be left at www.buffamleveille.com.