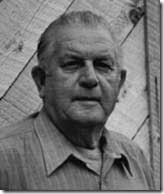 In memory of Gordon Bryan, a resident of Providence Bay, who died at the Manitoulin Health Centre, Little Current Site on July 10, 2013 at the age of 86. He was born in Spring Bay, son of the late Robert and Mabel (Hewitt) Bryan. Gordon had worked as an electrician and was a member of Local 353 in Toronto. He enjoyed woodworking and painting, as well as cooking and eating. He dabbled in model airplanes and model trains. He enjoyed the outdoors, fishing, hunting and four-wheeling. Gordon was predeceased by his beloved wife Elizabeth “Betty” in 1999. Loved father of Douglas (Darlene) of Mindemoya and Glen (Mona) of Windsor. Loving grandfather of Christopher (Jessica) of Red Deer, Alberta and Amber (Giovanni) Belcastro of Windsor. Predeceased by brothers Jack and Roy, as well as sister Idena. Predeceased by sister-in-laws Phyllis and Jean and brother-in-laws Reg and Archie. Also predeceased by partner Fern Rossi. Survived by nieces and nephews, Betty (Eddie) Simpson, Mike (Sandra) Morgan and Marlene (William) Jewell. Friends called at the Providence Bay United Church on Sunday, July 14, 2013 from 7 pm to 9 pm and from 10 am to 11 am on Monday, July 15, 2013. The funeral service was conducted in the Providence Bay United Church on July 15, 2013 at 11 am with Reverend Janice Frame officiating. Burial in Providence Bay Cemetery. If so desired, donations to the United Church Auxiliary or Diabetes Association would be appreciated. Online condolences may be left at www.culginfuneralhome.ca. Culgin Funeral Home, Gore Bay, 705-282-2270.