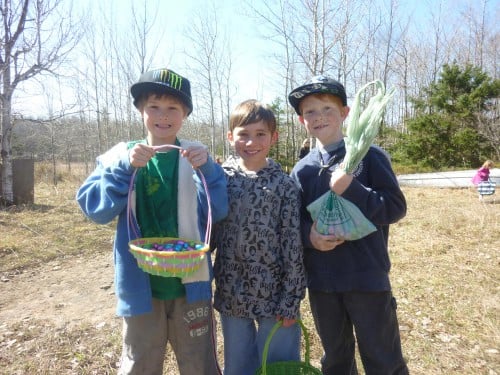 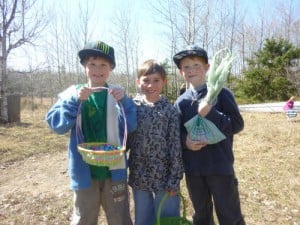 Amber Merrylees said she was very happy with the turnout this year, and noted how great it was to be able to have beautiful weather. “It’s the first year in a while that it hasn’t been done in the snow.”

Ms. Merrylees said she started the hunt more than 20 years ago at the Gore Bay park. Since then it has graduated from the schoolyard to where it is now.

“Ed Third granted us the use of the property years ago,” Ms. Merrylees said. “He would come every year to see the kids; he loved to see them run through the bush.”

The hunt began, and three separate groups: Grade 1 and under, Grades 2 to 4, and Grade 5 to 8, set off in three different directions. Many first-timers were carried by their parents and once an egg was spotted, the little ones were set on the ground to retrieve their find.

“Parents are not allowed to touch the eggs. The hunt is only for the kids and that keeps it fair,” Ms. Merrylees said. “We do it just to see a smile on a kids face.”

And many smiles there were. Whether you were an avid hunter, a casual one, or even a first timer, each child was seen walking away with an unhealthy amount of egg-shaped chocolates and a large grin on his or her face.

A lot of help and donations make the hunt possible. The Gore Bay Legion donate every year, and this year Ice Lake and Gordon Township donated; Manitoulin Milk Subsidy, McCann Concrete, Fogal’s Chainsaw and many other local businesses also donated money and eggs to the hunt. Bulk Barn, where the majority of the eggs are purchased, gave organizers a discount this year and also donated to the hunt.

“It used to be only the Legion who donated. Now a lot of the local businesses donate and there are donation jars for the Easter egg hunt in stores so the public can give, and a lot of parents help out too,” Ms. Merrylees said.

Ms. Merrylees also gets a lot of help setting up and supervising the hunt. Her own kids have grown up and now have kids of their own, so they help as much as they can. Her daughter, Adrianne, set up a Facebook page called “Easter Egg Hunt,” encouraging parents to write about their day with their children and post pictures as well.

“My son, Kevin, is the egg delivery man. He drives to Sudbury and picks up the eggs from the Bulk Barn,” Ms. Merrylees said matter-of-factly. “And this year Theresa Noble came out to help set up and supervise too.”

When asked what he was going to do with his basket of goodies, Shawn Jewell replied, “Eat them! And share some too.”