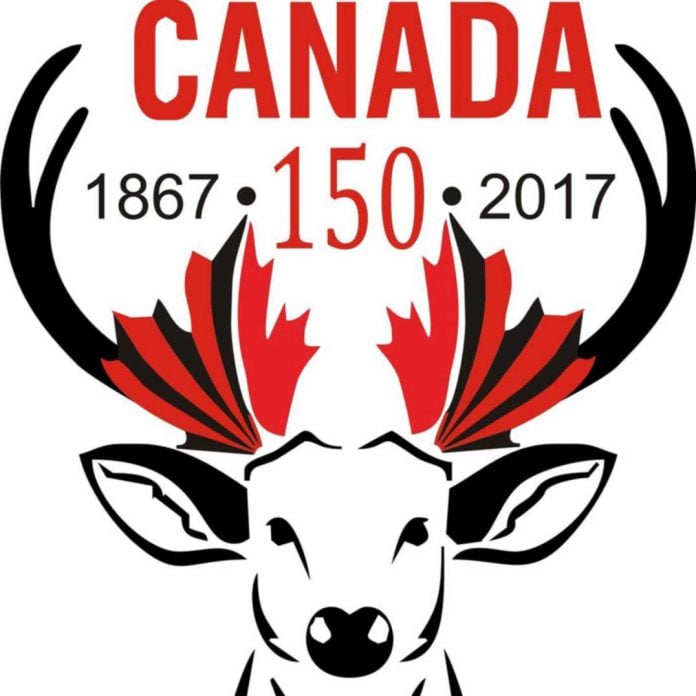 GORE BAY—Area residents will no doubt want to join in on the Canada 150 celebrations being hosted by Gore Bay and Gordon/Barrie Island on July 1. There is certainly a day full of events and events-activities to take part in.

“It will be an amazing day,” stated Lorraine McDonald, a member of the local Canada 150 celebrations committee which was formed and started work on this year’s celebration October.

To get everyone in the mood early for the celebrations, this Thursday was the official unveiling in Gore Bay of two Muskoka-style chairs painted in Canada colours. Arthur Pummell made the chairs (as well as washboard toss equipment over the winter. He explained the two large Muskoka style chairs are both seven foot tall and four feet wide.  He built the large chairs  and his wife Jane, along with Lee Chatwell, painted the chairs in red and white with the Canadian maple leaf prominent on both.

The chairs will be installed at the Canada Post office and at the waterfront in Gore Bay.

“One of the many featured events of our celebrations (July 1) is the 5K Canada Day colour Run/Walk being held,” said Ms. McDonald.

Among the many other events to be held include a pancake breakfast at the Manitoulin Island Country Club in the morning, a flag ceremony with Rebecca Bailey singing O’Canada while members of Gore Bay Volunteer Fire Fighters raising the flags.

A dog show will also take place in the morning. The Town of Gore Bay and Gordon/Barrie Island Township will be presenting lifetime achievement awards to several local residents at a presentation on the main stage being set up for the day. A DJ and street dance will be held throughout the day with many local bands performing.

A barbecue lunch, tennis tournament, sumo wrestling, rock climbing wall, Velcro wall and bouncy castle, will all be set up on Meredith Street. And there will be kids’ games in the afternoon.

Along with music being provided by a DJ and a street dance being held later in the evening, live music and a beer gardens will be set up early in the afternoon and run through the day. Ms. McDonald noted there will be a lot of local bands providing the live music.

A rib dinner is also going to be held at supper time.

“There should be something for everyone to enjoy during the day,” said Ms. McDonald.

Merchandise is already available for the celebrations with Gore Bay Canada Day 150 t-shirts and buttons on sale, and tickets for the rib dinner available.

As well, local residents are being asked to Paint the Town Red and to participate in a celebrate and decorate contest. To celebrate Canada’s 150th anniversary of Confederation, Gore Bay’s 150th Canada Day committee is encouraging local residents and business owners to show their Canadian Pride by decorating their front doors, porches, and windows with red and white and to fly a Canada flag throughout the year. The contest will start June 1 through September. Judging will take place on Saturday, July 1, Canada Day.