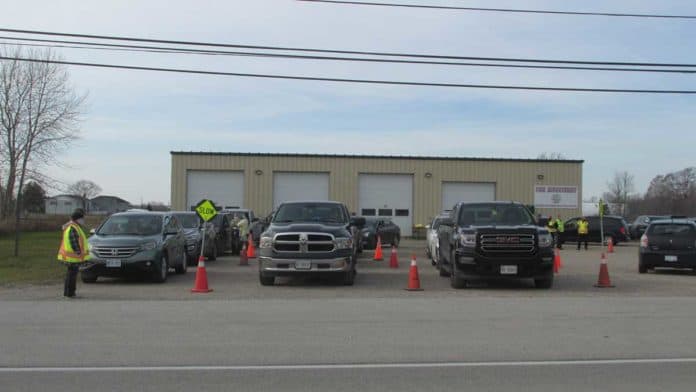 GORE BAY – A drive-in flu vaccine clinic put on by the Gore Bay Medical Centre with help from members of the Gore Bay fire department last Friday proved to be a huge success.

“We were able to give 147 people their flu shot, which is very good,” said Dr. Shelagh McRae of the drive-in flu clinic held for residents of Western Manitoulin. The drive-in clinic was held at the Gore Bay Fire Department fire station.

“It turned out to be great and we say thanks to all the volunteers. There must have been at least 12 volunteer firefighters on hand,” said Dr. McRae. She pointed out, “a lot of the organizing and setting up the site, along with traffic management was carried out by the fire department; they had several lines for cars to follow and there must have been 15-18 cars in line at one time. Then after they were lined up we would approach each vehicle and have the person roll down the window of the car, show us their health card, then roll up their shirt sleeve and we would give them the flu shot. Once that was done they would have to wait 15 minutes to make sure there were feeling no affects from the flu shot and then they could leave. It was a very well-organized event.”

Dr. McRae told the Recorder the medical centre had approached the fire department about helping with the drive-in clinic. “They were more than happy to help out.” She pointed out with restrictions on the number of patients that could be in the medical centre waiting room at any one time with the pandemic, there was not enough space to handle a large crowd of patients.

Mike Addison, Gore Bay fire chief told the Recorder, “the doctors told us they could only have so many people in the medical centre office and waiting room at one time. Dr. (Chantelle) Wilson had the idea of the drive through clinic.”

“I met with Dr. Wilson and Dr. McRae on how this could be set up and we held a test drive (last week),” said Mr. Addison. He said that along with the firefighters, several community volunteers helped out as well.

“We’re helping by managing the traffic,” said Mr. Addison, who pointed out the fire department members moved all their fire vehicles to an area in the parking lot and beyond the flu clinic area so that if they received  a fire call they could respond to it immediately.

“We ran out of the regular (flu) vaccine, right at about the same time we ran out of people in line to give the flu shot to,” said Dr. McRae. “We didn’t need to turn anyone away. It is very good that we were able to have that many people vaccinated at the same time.”