GORE BAY – If not for the quick thinking of a local resident who was looking after and cleaning a friend’s housing unit in Bayside Apartments in Gore Bay, a fire that took place could have been very serious.

Mr. Addison explained that, “this was the type of fire that could have been really bad, and fortunately it wasn’t. It was an electrical fire, a light fixture that took fire in one of the apartments at the Bayside apartment building. Fortunately, (Ms. Robinson) who is not a tenant in the building, but was looking after and cleaning this one unit, was there. She turned off the power to the light and alerted the residents in the building of the fire by knocking on their apartment doors. And, one of the residents in the building brought out a fire extinguisher and put it out.”

“When we got there the fire was out. There was a lot of heat around the fire extinguisher,” continued Mr. Addison. “We made sure everything was safe and checked the attic as well. We didn’t, fortunately, have to put any water on the fire.”

There was a little damage around the light fixture, said Mr. Addison. He reiterated, “if Joyce had not been in the apartment at the time, it would have been bad, really bad. And, the alarm system in the building didn’t go off.”

The incident took pace at 11:43 am this past Sunday, February 21. The building is owned by the Manitoulin-Sudbury District Services Board.

Mr. Addison noted, “I had some concerns; I was a little annoyed that when we got there no one was outside, except for one person. This was probably due to the fire alarm having not gone off.”

“If not for her (Joyce Robinson) and the gentleman (Ron Benoit) who used the fire extinguisher to put the fire out, the building would have sustained a lot of damage,” added Mr. Addison. 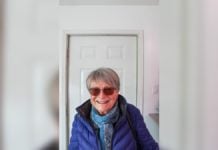