“Manitoulin Island Lions have been on the Lions International map for a long time,” stated Bob Beaven, Lions District Governor of District A-5 Ontario/Quebec, at the Gore Bay-Western Manitoulin Lions Club’s 40th anniversary this past Saturday.

“Thank you for having us here tonight,” stated Lion Governor Beaven. “This is the first time I’m attended a Lions’ 40th anniversary charter night.”

“With a history of 40 years of the club, it speaks to members having put in a lot of hours, effort and commitment in the community for other people’s benefit,” said Lion Governor Beaven. “Lions are out there in the community, having fun and working hard in the community.”

“Wear your Lions colours proudly,” stated Lion Governor Beaven. “Forty years is a long time. You started the club 40 years ago with 33 members and only one person has remained within the club all those years. It means so much and says a lot about the commitment of Lion Norm Morrell. I’m sure you have brought in a lot of new members over the years.”

Lion Governor Beaven presented Lion Norm Morrell with a bottle of wine that read, “Teamwork makes the Dream Work.” In turn Lion Morrell turned it into a fundraiser for the Lions, taking bids on the bottle of wine, which was auctioned off for $100.

Among the other dignitaries and members of other Lions Clubs in attendance included David Kidd, first vice-president District Governor of Lions District A-5, and his wife Debbie Kidd, Lion Zone Chair, both of Sault Ste. Marie Lions Club, Carmen Portalance, past district governor from the Sudbury Lions Club, and Zone Chair Lion Elly Charrette.

Lion Morrell pointed out the Gore Bay-Western Manitoulin Lions Club official Charter Night was held on May 2, 1982. “I guess I was the only one of the 33 members who survived the test of time and remained in the club the whole time. The only downside is that I have to talk as the M.C. for the evening, and we all know how much I hate talking,” he quipped.

“I would like to welcome all the current members of our club, and from other clubs on Manitoulin (Little Current and Southeast Manitoulin Lions) and those from off-Island for being here tonight,” said Lion Morrell. “And a big welcome to all the Lions District executive for being here. District Governor Bob and his wife Josephine came all the way from Englehart.

Other guests of the evening included Margaret Stringer, trustee with the Rainbow District School Board, “who brought along her husband Jim this evening.”

“We do have one member of our club that has been a Lion longer than 40 years,” said Lion Morrell. “Joe Baker has survived longer than any of our club members, 42 years, having been born and raised on Manitoulin but who started with the Warren Lions Club, and moved on to the Widdifield Lions Club of North Bay. Joe has the most experience in Lionism among members of our club.”

Lion Morrell asked fellow Lion and friend Miriam Wailes, who he mentioned was a schoolmate in Grade 10, to say grace before dinner. “Miriam moved from Galt with her father, and one sister and three brothers. Her dad ran a store on the Island for many years and was a well-known minister.”

After the fantastic dinner held at G.G.’s Diner Restaurant in Evansville, the Lions raised their glasses in a toast to King Charles, as well as for Lions Club International and for all the Lions Clubs represented at the event.

“I would also like to welcome our friends from the Rotary Club of Gore Bay, Rotary president Keith McKeen and his wife Louise,” said Mr. Morrell.

“With two service clubs in the town of Gore Bay I think we do very well in contributing to the community,” said Mr. McKeen.

Lion Morrell noted that 10 years ago at the Lions 30th Charter night celebrations, “Ron Lane who was mayor of the town at the time talked in his speech about the importance of partnering. Today we all need to partner with other clubs and groups, more than at any other time; Rotary, Legion and other services clubs to pull together for things. This years Gore Bay Harbour Days celebration was a boost for everyone involved. I would suggest that we organize a meeting of the Rotary, Lions, the Town of Gore Bay, and other interested groups to tackle the Harbour Days celebrations next year. This event is too good to just let go.”

Currently the local Lions Club is in need of a new president, and the club needs to entice new members to join. “Our club has a lot of experienced Lions people,” said Lion Morrell. “There is nothing Miriam Wailes and I don’t know about Lions but there is also not much we can do to help out anymore,” he quipped.

“The big thing with service clubs is the team effort, having fun and enjoying the work and camaraderie. My 40 years in the club have been most enjoyable,” said Lion Morrell.

Lions District Zone Chair Elly Charette said, “It is a privilege to be with all of you here tonight. Forty years is an amazing accomplishment. One of my goals as zone chair is to bring all Lions clubs together. Your club has had so many accomplishments over those 40 years. Congratulations.”

First vice district governor David Kidd said, “it is an honour to be here tonight. And I like the mention here tonight abut working with other service clubs, and other groups. Let’s all work together. I hope this club serves the community for another 40 years. Congratulations.”

Past District Governor Carmen Portalance said, “It is an honour to be here this evening. You have a tremendous club, with all the events the Gore Bay-Western Manitoulin Lions Club put on and the work you do in the community. I also know you partner with other service clubs. Survival of smaller communities and clubs is through partnering with others.”

“Congratulations on your 40th anniversary charter night,” said Lion Portalance. “I was your governor last year, and no doubt the best part of being governor is to visit clubs. The clubs are the ones that make Lions work. Lions members are out in the community, providing service to the communities. I commend all of you for being Lions members.”

“If the world one day had no Lions Clubs the world would end,” stated Lion Portalance. “I commend all of you for being Lions, and all the serviced you have provided, and will provide in the future for your community.” 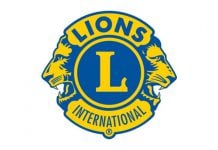 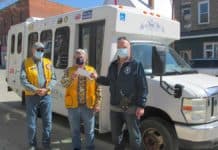