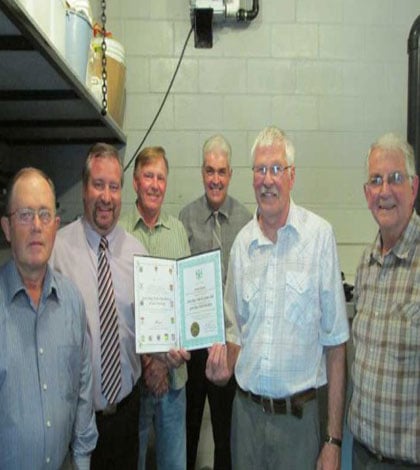 “It takes a lot of community interest, financial help, volunteers and commitment to run a fish hatchery. Tonight we honour this assembled group for your help with the new Gore Bay community fish hatchery,” stated Ian Anderson, of the Gore Bay Fish and Game Club (GBFGC), who was master of ceremonies at the opening of the new hatchery in what had been the former town pump house.

“The creation of this new hatchery has been the result of the work and effort of a lot of people and organizations,” said Mr. Anderson. “This opening is to honour all these individuals.” Among the partners is Mike Mantha, MPP for Algoma-Manitoulin, Carol Hughes, MP for Algoma-Manitoulin-Kapuskasing, and “Gore Bay town council for its long history and support of the hatchery, and to those on hand tonight, Mayor Ron Lane, Annette Clarke, Councillors Betsy and Jack Clark, Harry VanderWeerden and Pam Bond (who was not in attendance). If it hadn’t been for the council previous and this council, this hatchery would have not become possible.”

Mr. Anderson also praised the support of Manitoulin Streams with its expertise in fishery habitat creation, the LaCloche Manitoulin Business Assistance Corporation (LAMBAC) for its financial support and Mike Meeker, “Mr. Fish, who has been a tremendous asset to our hatchery operations practically since day one.”

“The Ministry of Natural Resources, at times when things have gone wrong, we have relied on them since day one,” said Mr. Anderson. He mentioned Paul Methner of the Blue Jay Creek Fish Culture Station, Wayne Selinger, the MNR area biologist and Brian Riche, MNR area manager of the Espanola office. As well he noted the Manitoulin and Area Stewardship Council and the Ontario Federation of Anglers and Hunters that have also provided financial support, while the Little Current Fish and Game Club has provided both financial assistance and volunteers. “In fact we have relied on all the Fish and Game Clubs on the Island at one time or another,” he said. He also praised the efforts of the United Fish and Game Club, noting members Jim Sloss, Al Clarke, Rob Seifried and many more.

“As well the Gore Bay Fish and Game Club members, such as president Chris Robinson, Sandy and Doug McDonald, Ches Witty, Bill Oldenburg and many more. Bill Oldenberg and Ches Witty have been the major architects for this new hatchery, and have done a tremendous amount of work,” he added.

Mr. Anderson explained, “the Gore Bay Fish and Game Club, the town of Gore Bay and the MNR all have a very long history of co-operative fishery management. In about 1985 the MNR invited representatives from a number of communities to a meeting on the North Shore to discuss a new program called the Community Fisheries Involvement Program or CFIP. A small financial incentive was offered to allow communities through their local fish and game clubs to get into the fish rearing business. Two prominent citizens from Gore Bay also attended, our late Mayor Larry Lane and Jim Sloss, who is in attendance tonight.”

“Since 1986, 27 years ago, we have collectively raised and stocked in local waters 2,970,836 salmon and trout, give or take one or two,” continued Mr. Anderson. These have included different species, including Chinook salmon (2,083,123), 587,352 lake trout, brown trout and speckled trout, rounding out the balance. “This has made a significant contribution to the recreational fishery of the North Channel and the south shore of Manitoulin Island.”

“A lot of folks have volunteered thousands of hours to achieve these results and to name them all would be next to impossible over that time period but I will highlight a few that have given much; the late Ed Third, Max Graham, Alex Witty and Larry Lane in the early years, and more recently Bruce Third, George Calback and Rick Fogal, to name only the tip of the iceberg,” said Mr. Anderson.

As for the role of the Gore Bay Fish Hatchery, “there is no doubt that over the past 27 years the Gore Bay hatchery has been instrumental in improving local angling and contributing to a world class fishery. Ports like South Baymouth, Providence Bay, M’Chigeeng, Gore Bay and Meldrum Bay all saw numerous salmon anglers on a daily basis in the 1980s and 1990s. Lodges, restaurants, gas stations, tackle shops, marinas and boat storage facilities to name the obvious, all benefitted.”

Although the hatchery currently raises Chinook salmon, “the hatchery is capable of raising other species, however MNR permission and permits are rightfully required to raise and release any species of fish in Ontario public waters,” said Mr. Anderson. “The Lake Huron Strategic Stocking Plan for species other than lake trout is currently being worked on with input from a cross section of stakeholders including several member from Manitoulin Island fish and game clubs. We are hopeful that at the conclusion of this plan, opportunities will exist which will allow the Gore Bay hatchery to contribute to species diversity within our local Lake Huron waters.”

Ches Witty and Bill Oldenberg then described the construction of the new hatchery and the operations involved in the fish rearing business from egg collection to fingerling release.

It was pointed out that in the former fish hatchery in the Gore Bay wharf building, there was a total of 13 fish troughs, compared to the new hatchery with four. It is energy efficient, and much easier to clean and maintain.

“The main problem with the old hatchery was with water flow,” said Mr. Oldenburg. Under the floor is a 20-foot cistern, and the water is nine feet deep. “And with this new hatchery we can get water 400 feet out in the lake, so there will be no problems with water from now on.”

With the recirculation system and other improvements with the new system, “we can run the tanks in a way that we can control the water temperatures and flow to make fish grow faster or slower,” said Mr. Witty.

Mr. Oldenburg pointed out, “a lot of fellows put a lot of hard work in here,” he said, noting that automatic fish feeders are used to feed the fish. “And these fish will have a better start on life than the fish we have raised in the past.”

“This hatchery is going to be top line,” said Mr. Mantha. He praised members of the club and the mayor and council for their vision in opening the hatchery. “You should be proud of the leadership you have shown. I would like to congratulate everyone on the opening of the new hatchery.”

“I’m pleased with everyone having been able to attend the opening of the new hatchery,” said Chris Robinson, chair of the GBFGC. He pointed out the club currently has 50 members and the group meets once a month. He outlined the many avenues the club is involved in and noted that fundraising is very important to the club, and in 2012 through the tremendous support of the island community, the club raised almost $22,000.

“The Gore Bay hatchery has proven its worth and desires to continue,” said Mr. Witty. “We believe our efforts since 1986 have made a difference. We are the only community hatchery in Northern Ontario raising Chinook salmon and hopefully again, rainbow trout for stocking in northern Lake Huron.”

“We applaud all of our partners in this worthwhile pursuit and look forward with your help, to many more years of rearing sports fish for the benefit of everyone,” added Mr. Anderson.