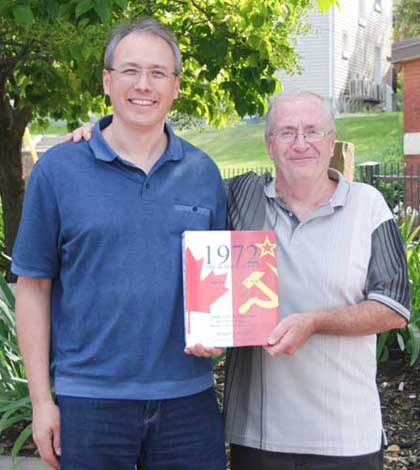 Some of you may remember that six or seven months ago I penned a rather lengthy article for The Expositor on the 40th anniversary of the seminal “Russki-Canukski Hockey/Cultural War of 1972.” At the time I wrote the article, having read all the books, articles that I knew existed on this clash, be it Brad Park’s, Ron Ellis’, Paul Henderson’s or Brian McFarlane’s etc., I believed that I had a solid knowledge of the “Series of the Century.” I was reaffirmed bythe overwhelming response to my article. However, things quickly changed when a local First Nations Band member contacted me and asked if he could visit me at my home.

What he brought to me demonstrated that there was much, much more to learn about this very significant piece of Canadian history. The gentleman, Lyman Corbiere of M’Chigeeng, presented to me a voluminous “tome” (in excess of 400 pages) entitled: ‘1972, The Summit Series: Canada vs. USSR.’ The striking Red/White/Yellow/Hammer and Sickle front cover induced me to delve into the contents right on the spot.

Mr. Corbiere, however, had a story to tell me first. This story was almost as intriguing as the massive book itself.

Sitting beside his wife Fay, Lyman proceeded to inform me that this book had recently been written by his son!

I had known Lyman for more than 30 years and had never known either of his sons Mark and David (nor his daughters April and Tammy for that matter) to be journalists or authors. I was indeed puzzled. Lyman and Fay immediately straightened my quizzical mind.

The book was written by a Mr. Richard Bendell. I could not see the connection until Lyman explained that Richard was the product of an early love relationship many, many years ago. At that time Mr. Corbiere was working in southern Ontario and met a lovely lady from that area. The 1960s was not a happy time for Natives working in the big cities. Eventually locals who were negative about this relationship were able to get the city constabulary to tell Lyman to move on. Being young, Mr. Corbiere acquiesced and left. It would not be until last year that Lyman knew that his girlfriend had been pregnant at the time and had given birth to a son she called Richard. She would eventually meet a man by the name of Bendell who she subsequently married. Mr. Bendell would raise the young lad as his own and Richard never knew the entire story until recent years.

Finding out about his birth father coincided with the publication of his massive missive. Some of Richard Bendell’s mother’s family, knowing the real story about Mr. Corbiere had finally researched and found a Mr. Lyman Corbiere living on Manitoulin Island. They encouraged Richard to contact his birth father which he did thereafter. He was naturally nervous but arranged to meet Lyman and Fay.

Richard was welcomed with open arms and much acceptance and love. Looking strikingly like his birth father no doubt eased the transition and acceptance. There of course are more details. It is a wonderful human interest story but that is for another time.

My emphasis here is the magnificent book written by Mr. Corbiere’s son Richard. I believe this publication to be the most comprehensive gathering of information about the Series of the Century. One might even refer to it as the “quintessential reference book” on the subject.

Before describing the allure of the book 1972, it might be helpful to know that Mr. Bendell has been a CMA, an accountant, for many years. Accountants love numbers, details, charts, analysis and of course, accuracy! Those words in many ways explains the allure of this publication. Upon receiving the DVD set of this series several years ago, Richard began to notice many errors in reported scoring summaries of the games in the 1972 Series. This led him to examine each game minutely. To his surprise, he realized that some players did not receive proper credit for their contributions to Canada’s unlikely triumph…and that others received more credit than was their due.

To illustrate: Brad Park, an offensive defenseman, who was expected to take the place of the injured Bobby Orr (now who could do that!!??) was often panned to the media for his lack of offensive output. What Mr. Bendell discovered after much labourious playing, replaying, stopping, replaying of the DVD set was that Mr. Park had been deprived of four assists by inattentive or incompetent officials (and there were plenty of those, especially in the USSR!). Where published statistics show Park with only five assists, in reality he actually had nine…9! This changed, dramatically, the assessment of Park’s contribution. Remember this: that was nine assists in eight games which was very Bobby Orr-like!

The above is a simple example of Mr. Bendell’s “number work” in this publication. He also produces numbers for “face off results; icings; off sides, power plays, shots, saves, save percent, plus – minus, head-to-head stats between players. For example, the under-rated defenceman Gary Bergman was a huge plus against all Russian stars be they Petrov, Mikhailov, Kharlamov (who is in the NHL Hall of Fame) and Maltsev; he is another example of a player who did not receive the proper credit for the greatest comeback of all time!

The numbers portion of the book are, I suppose, for the sports fanatics, the most interested of those who followed this series. However Mr. Bendell does not stop with numbers when it comes to his research. The narrative portion of his book is equally compelling. One can hear the very passion in Richard’s voice as he describes the games themselves, the food the players ate/or didn’t eat, the locker rooms, the characters be they Phil Esposito, Paul Henderson, Vladislav Tretiak or the disgraced Allan Eagleson.

Mr. Bendell himself says, “It is a book beyond the story of a series that many of us thought we knew but still has secrets to tell and much for us to learn about.” He is spot-on with this analysis! Much of what you find here are “original stories published for the first time since the series took place 40 years ago.”

Mr. Bendell has painstakingly obtained transcripts, old films, anecdotes, player quotes, coaches’ comments, management views, fan opinions most of which have never been reported before. He explores the training camps of both the Russians and Team Canada. He reveals new information about the largely unreported exhibition games against the Swedes and the Czechoslovakians and reports in detail on the mostly forgotten Team Canada Red vs. White exhibition games in various Canadian cities.

For myself, his comments and insights about the 30 plus players who Coach Harry Sinden invited to camp—when he knew they were limited to just 18 for games—were most enlightening. For example, in game one this resulted in Sinden dressing only four defencement who had to play some 30 minutes each against the super sonic Russian forwards. Is there any doubt why the Soviets came back from a 2-0 deficit to blow Canada out 7-3? And by the way, where was super-star goalie Ken Dryden in that game—or any other games for that matter? Read about what Mr. Bendell thinks of goalie Tony Esposito’s play and about brother Phil Esposito’s leadership. There are many surprises in this book. I was especially pleased to see what Mr. Bendell determined about Yvan Cournoyer’s and Ron Ellis’ play. You will find your own individual revelations! And by the way, what were the two national teams doing during the two weeks between games in Canada and Russia? Remember author Bendell was just seven when the series was played, but he followed it as an enthusiastic grade two kid and has managed to sustain this enthusiasm for more than 40 years.

You can learn more on the Internet at www.facebook.com/72series which is an excellent site. You can purchase the book (and I highly recommend that you do if you have any interest in the “Series of the Century”) at the Expositor office in Little Current or by going to www.amazon.ca. The “Ultimate Collection Edition” can be found at www.heritagehockey.com. You can also search for it using: ‘1972 The Summit Series – The Untold Story’ by Richard Bendell.

In the author’s own words: “In the end I wrote and hoped this book could be a definitive retro-perspective and ultimate reference guide on the ‘72 series. Once I discovered the stats had errors, I felt I had a responsibility to share and offer to others what I had found on behalf of the fans of the series and for the players, staff and officials who lived and breathed it. To finally set the record straight so to speak.”

Post-script: Last week Mr. Bendell, myself and Expositor publisher Rick McCutcheon sat down for five plus hours to discuss the book and the series. We were warmly hosted at Mr. McCutcheon’s home and talked seemingly endlessly and with greatest ease and enthusiasm (enough that, though I was mostly in the shade, I developed a rather severe sunburn! This I believe was because the conversation was so compelling that I did not notice the path of the sun!).

Richard and I had talked about his book before so it was extremely interesting to see and hear Rick and Richard converse about the facts of the series. I have mentioned above the passion in Mr. Bendell’s voice when he talks about 1972, but on that Monday I observed and heard it more intently. I could only describe the vibrations in Mr. Bendell’s voice as “electrons flying in formation” (A phrase I had heard before, relating to a harmonious happening). One does not have to be a student of quantum physics to understand the meaning of the phrase. All three of us were on the same page for that extended period of time. Seek out the book and you’ll see what I mean! Mr. Bendell has certainly brought the Series home to me!