KAGAWONG—The Remembrance Day ceremonies held in Kagawong this past Sunday featured a true story of humanity reigning out in the face of tragedy, while a second story told of how someone who also showed true humanity was instead persecuted and executed for helping others.

“The Kagawong Cenotaph Board welcomes everyone here today, including our special guests The Second Battalion Irish Regiment of Canada, based in Sudbury,” said service leader Dianne Fraser. “We are remembering that it is the 100th anniversary of the end of World War One. After four years of fighting, at the eleventh hour of the eleventh day of the eleventh month, the war was over and peace took over.”

Ms. Fraser noted that Carol Hughes, MP for Algoma-Manitoulin-Kapuskasing was attending the ceremony in Blind River, but read a letter on her behalf.

After the opening singing of the Canadian national anthem, and “This is Your Land” sung by Mary Buie, Susie DeKuyper, Jim Munro, Peter Gordon, Mark Munro, Lydia Burlein, and Diane Larocque, Ms. Fraser presented a tribute to Nurse Edith Cavell, and Billings World War One veterans.

“Today we pay tribute to nurse Edith Cavell and her noble work during World War One,” said Ms. Fraser. “Edith Cavell was born near Norwich, England. Her father was a priest in the Anglican Church, the religious faith that she was brought up with and was to provide an important influence in her life.”

Ms. Cavell trained to be a nurse at the London Hospital in 1900, and in 1907 she was recruited to be the matron of a new nursing school in Brussels, Belgium. “This was a period of growth in the prestige and importance of nursing, a period which began with Florence Nightingale during the Crimean War,” said Ms. Fraser.

In 1910, Edith Cavell began one of the first nursing journals documenting good nursing practices and basic standards, becoming a teacher of nurses in hospitals throughout Belgium, seeking to improve nursing standards.

“In 1914 when the First World War broke out, Edith was in England but she moved back to Belgium to her hospital. After Germany invaded Belgium, Brussels was under a very strict German military occupation: No aiding and abetting the enemy,” said Ms. Fraser. “Many British soldiers had been left behind in the withdrawal of these Allied Forces and were stuck in Brussels. Miss Cavell decided to aid the British servicemen, hiding them in the hospital and safe houses around Belgium. From these safe houses, some 200 British servicemen were able to escape to neutral Holland. At the same time, she continued to act as nurse and treated wounded soldiers from both the German and Allied side.”

However, in mid-1915 nurse Cavell came under suspicion for helping allied servicemen to escape, and in August 1915 she was arrested and imprisoned. “After her arrest, she did not try to defend herself but only said in her defence that she felt compelled to help people in need.”

After a short trial, Edith Cavell was found guilty of treason and sentenced for execution. “This surprised many observers as it seemed harsh given her honesty and the fact she had saved many lives, both Allied and German.”

“On the night before she died, she said ‘Patriotism is not enough. I must have no hatred or bitterness towards anyone’,” continued Ms. Fraser. “These words were inscribed on the monument erected in her honour near Trafalgar Square, London, England.” 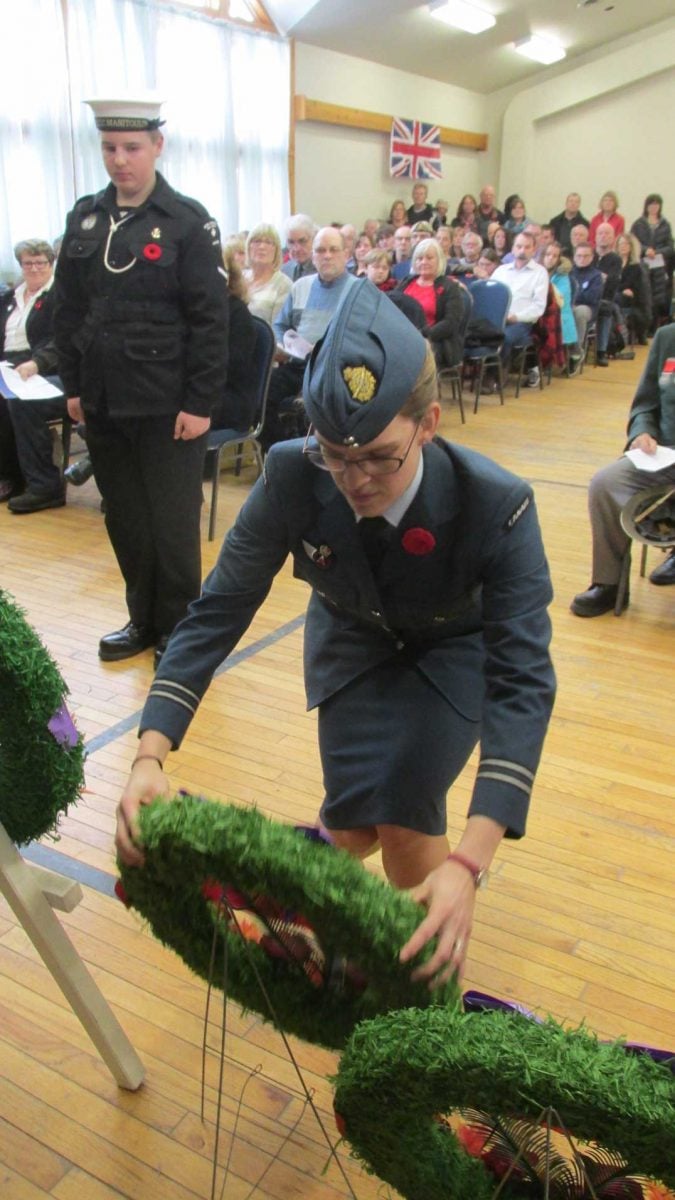 Later in the program, Rick Nelson, vice-chair of the Kagawong Cenotaph Board, told the incredible story of a 21 year-old American bomber pilot Second Lieutenant Charlie Brown. Half of his crew were wounded or dead. Suddenly, a Messerschmitt fighter pulled up on the bomber’s tail. German ace Franz Stigler was the pilot, and with the squeeze of a trigger, he could destroy the young American crew.

Their incredible story is the basis for a book titled ‘A Higher Call,’ about their encounter in the skies over Germany in December 1943.

“The two men featured in this World War Two story had their destinies shaped as a result of that global conflict, first as deadly adversaries, then later as brothers.”

“This true story was kept a secret for nearly half a century,” said Mr. Nelson.”On a chilly December afternoon in 1943, five days before Christmas, these two men first met above the clouds, in the skies over northern Germany. A badly damaged American B-17 bomber struggled to get itself out of enemy German airspace.”

Franz Stigler was drafted to fly attack fighter planes. He flew almost 500 combat missions, getting shot down over a half dozen times but always surviving to fly another day.

Second Lt. Charlie Brown of West Virginia graduated from working on the family farm to work his way up the military ranks to get to fly the big B-17 four engine bombers, nicknamed the Flying Fortress. “It was that very first one, his rookie flight, that almost got him killed,” said Mr. Nelson.

“He, his crew and his aircraft were one of 500 bombers departing England on December 20, 1943, assigned to destroy a factory in Bremen, Germany, not far from the North Sea,” continued Mr. Nelson. “Right over the target, Charlie Brown’s aircraft was the first to be hit by flack from the ground. The nose of the plane was blown off and one of his four engines ripped apart. Despite all that, the rookie pilot managed to drop his bombs over the target but was no longer able to maintain formation with the other 499 planes.”

“Charlie had to drop out and almost immediately was surrounded by 15 enemy fighter planes. It was a turkey shoot. They shot the plane to pieces. A second engine was now blown apart and a third heavily damaged. The anti-aircraft guns were all but put out of commission, half the crew wounded, some dead,” said Mr. Nelson.

“To make matters worse, 30,000 feet above the ground, five miles up, Charlie Brown and his co-pilot were unconscious because their oxygen masks malfunctioned. The aircraft began spinning and rolling out of control heading into a nose dive,” he said. “It was at 10,000 feet Charlie regained consciousness, noting he was finally able to stabilize the plane at 2,000 feet.

“As bad luck would have it, their escape out of Germany took them right over an enemy air base and guess who was there taking a lunch break…Franz Stigler,” continued Mr. Nelson. “He watched this unescorted B-17 bomber blazing a trail of black smoke flying low right over his head. He took off in his plane with every intention of finishing it off. But when he caught up to it, he saw the aircraft was totally defenceless, completely shot full of holes.”

“He could actually look inside the aircraft and see wounded and dead crew members, as their lives flashed before them,” said Mr. Nelson. “But Franz took his thumb off the trigger and spared the plane. For him to do otherwise would be the same as shooting at a man in a parachute. Instead, he flew in formation and gave hand signals to Charlie who was shocked that a German was escorting his plane toward the North Sea and out of enemy territory. Finally, out of harm’s way, Franz gave Lt. Charlie Brown a goodbye salute and said to himself, ‘you’re in God’s hands now.’ He hoped the plane could somehow make it back to England.”

“They got back alright, but it was a white knuckle flight all the way, obviously the longest flight of this rookie pilot’s life,” said Mr. Nelson.

The story did not become public for many years. “Then in 1985, at a reunion of World War Two pilots, Charlie Brown finally broke his silence and shared his experience about the German pilot. He really wanted to find him, and his air force buddies suggested he post his story in a  German aviation publication. Maybe the mysterious German pilot would see it. And Franz Stigler did! After all these years they finally found each other,” said Mr. Nelson. The two pilots wrote to each other and talked via phone regularly.

“On June 21, 1990, in Seattle Washington, 47 years after their first encounter, the two met again, this time on the ground in a hotel lobby. When Franz saw Charlie he immediately ran to him, and they hugged, and they cried. Charlie got his answer of why he was spared. ‘Franz,’ he said ‘was too much a gentleman to destroy us.’ They became as close as brothers,” he said.

“I’d like to acknowledge Cold War veteran and Kagawong Cenotaph Board Chair Peter Fletcher as the inspiration for this story being told today. He loaned me his book about a year ago (which I am supposed to give back),” said Mr. Nelson. “Regrettably, he wasn’t well enough to be with us today, but he was delighted the story about Charlie and Franz would be told.”

“For some time now, the Cenotaph Board had wanted in some way to properly honour Peter’s service. A Higher Call gave us that opportunity because the book is a story about the best parts of humanity and I think for those who know him, the best part of Peter Fletcher is his humanity. I close with a telegram I received at the 11th hour (from the book’s author Adam Makos). It’s dated November 5, 2018, from Broomfield, Colorado, and it’s addressed to Petty Officer 1st Class Peter Fletcher (retired).”

“Dear Peter, I was delighted to hear that my book ‘A Higher Call’ was chosen as part of your 2018 Remembrance Day event,” said Mr. Makos. “As I understand it, you indirectly inspired this after loaning your copy of the book to fellow Cenotaph committee member Rick Nelson… just make sure he doesn’t forget to give it back!”

“I hope the retelling of this heartwarming story of wartime chivalry, to your congregation, is as fulfilling to them as it was for me to research and write,” continued Mr. Makos. “I wish you all the best, Peter, and I salute you for your service in the Canadian Armed Forces and to your community. With thanks, Adam Makos.”