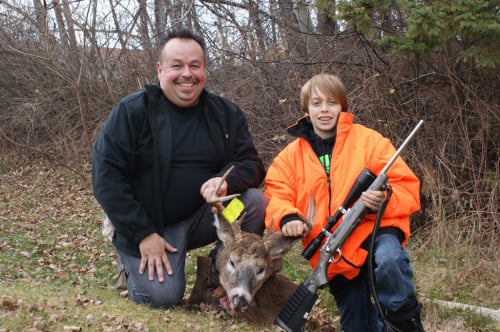 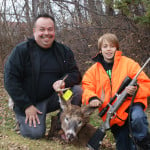 LITTLE CURRENT—Twelve-year-old Quinten Eade sits in his grandfather’s backyard, grinning ear-to-ear as he holds up the head of the eight-point buck he shot and killed just days into his first hunting trip.

The Newmarket youth and his father, Kevin, come to Manitoulin numerous times a year since Mr. Eade originally hails from the Island. They come up in the summer and the fall, but this is the first time Quinten has taken part in the autumn deer hunt.

“We had no luck (at our first stand) so we moved to the second,” Quinten recalled. The pair were hunting in the Green Bush.”We were there for about 20 minutes and my dad was like ‘look at that big buck.’ I thought he was joking.”

When Quinten turned around, though, there he was, pretty close.

“We set up and I shot and hit him,” Quinten recalled. “He ran and we had to track him.”

Quinten and his father found the buck at the top of a ridge, where the deer had collapsed and died from the shot, which was to the lungs.

He said he could tell the age because of the wear on the buck’s teeth, as well as the amount of tooth loss. He noted that if the Ministry of Natural Resources have a check point set up, they will stop to have the jaw checked to get an accurate age on the buck.

Mr. Eade said he was very proud of his son.

“He did everything textbook, safely and professionally,” he said of Quinten’s first time hunting. “You couldn’t ask for a better hunt.”

The week before the hunt, Quinten had completed his hunter safety course and his possession and acquisition licence.

Mr. Eade only had one tag, so with Quinten’s success, his hunting season is over.

“One and done,” Mr. Eade said with a shrug and a grin.

Since this is Quinten’s first kill, it’s family tradition that the meat from the deer will be butchered and given away to family and friends. Even though Quinten won’t have the venison from the hunt, he will have the buck’s head. His father kept the prize and intends to have his son’s first buck mounted. 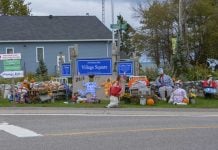 Get decorating for Harvest Glory Days 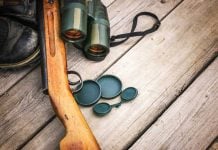 Hunting charges up from last year