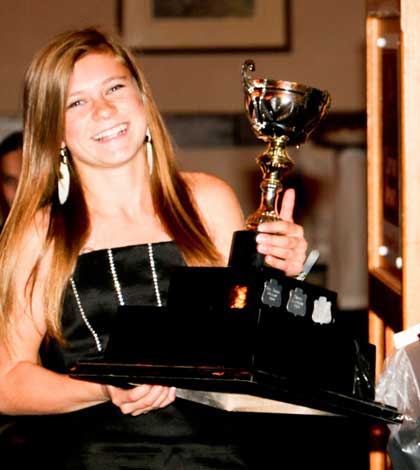 Hats off to head coaches Steve Doane and Mike Meeker who piloted their charges to silver and gold medal finishes respectively this past weekend. Steve and assistant coaches Sundance Hare and Dewayne Middaugh had their team battling hard all weekend in the tough A division of the popular event. On Friday, they beat the Neebing Hawks (4-0) and the Westfort Maroons (4-2). On Saturday morning, the Island cats tied the Cutting Edge Blades 5 all then dropped a tough one to the SDC Eagles 7-3. In the semis on Sunday the Panthers played awesome team defense to win a tight, 1-0 victory over the Elliot Lake Jr. Bobcats. In the championship match the local lads were just edged in a re-match heart-breaker 3-2 by the Westfort Maroons.

A couple of years older, the local Midget Panthers with coaches Mike and Randy Noble made their mark by having an undefeated weekend to finish with the championship trophy! Starting off with a 2-2 tie against the VP Bearcats, they powered through everyone from there including: 7-3 over Terrace Bay/Schreiber; 3-2 over Thunder Bay Beavers; 4-3 edging SAS Iroquois Falls; beating the Schumacher Cubs 5-2 and finally taking the gold in a rematch over Iroquois Falls 6 -4.

Hats off to Michael Laidley who had an awesome CJHL Prospects tournament out east, in Nova Scotia. Laidley held a point per game average over the whole event against the best Junior A players from all over the world. Keep up the hard work, Michael.

Congratulations to, Bronwyn Cooper, who ended her equestrian season in the Northeast Trillium division as Champion (1st) in the Pony Pleasure Hack, and Reserve Champion (2nd) in both Pony Hunter and B Equitation on Ripley (Believe It or Not is his show name).

She also rode a second pony this year named Sam (Sammunition) that belongs to the coach, Kerri Commanda at Black Creek Equestrian Centre. On Sam, Bronwyn and club member Autumn got 5th in Pony Hunter with Bronwyn doing the jumping rounds and Autumn doing the flats.

Thelor Von Pickartz, who is also part of the pony club (and has Manitoulin connections), was Champion in the Modified Junior Amateur Hunter Class, Reserve Champion in the Trillium Hunter and 7th in ‘A’ Equitation.

Both Thelor and Bronwyn attended the awards banquet in North Bay. This is the first time that anyone from Black Creek has been champion in a division and with both girls making champion status it is quite a testament to their hard work.

Both Thelor and Bronwyn also continued on with their pony club testing and on October 6, both of them achieved their C level. Congratulations to you both.

My brother Scott Leblanc recently helped put together a team to play in the Eric Lindros Celebrity Hockey Classic, an Easter Seals fundraiser. His Shop.ca squad raised nearly $8,000 and the Whitby based event raised over $116,000 in total, for the great charity. Scott had an interesting opportunity to play with Todd Warriner. The journeyman winger toiled for five different teams over his nine seasons in the NHL, but spent most of his time with Leafs as well as a Battle of the Blades contestant. Although Warriner was an all-round nice guy Scott played against tough defenseman Al Iafrate, who cross-checked Scott in the chest for his troubles. After all the on-ice fun he also got to have a pint with number ‘88’ himself, as well as the infamous Tiger Williams.