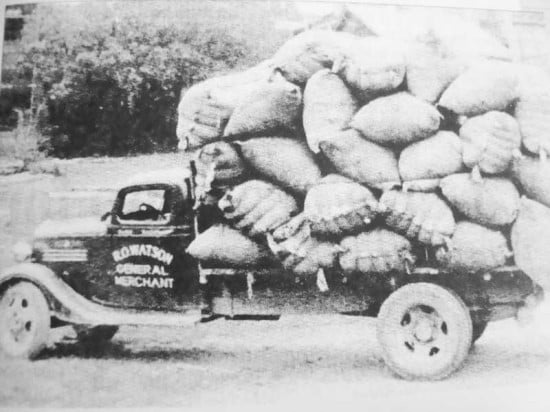 Sandfield’s Andy Watson has the claim to fame of driving the first truck and the first commercial vehicle across the Manitoulin Swing Bridge once the bridge’s transition from exclusively a railway bridge to one that was shared by both train traffic and vehicular traffic. That was in 1944.

Mr. Watson was employed by his father, the late R.O. Watson, at Watson’s General Store, but preferred to work outdoors driving the company truck to Little Current or Manitowaning to pick up the winter supplies along with his trips to Sudbury hauling logs. The logs were harvested on Manitoulin Island by farmers who were looking to make extra money in the winter.

“The farmers took out the logs and piled them in the spring and we did the shipping,” Mr. Watson explained.

The day the bridge was scheduled to open, Mr. Watson took a load of timbers destined for INCO’s Creighton Mine to Little Current. Renovations required to make the bridge a dual-purpose structure weren’t completed on the promised day, so Mr. Watson spent the night in Little Current to await his Sudbury trip.

“We usually shipped the timber by train (from Little Current) but we had this one load left over and that’s what I was doing that day,” the 96-year-old shared with The Expositor. Loads would have typically crossed the channel aboard the car/truck ferry the ‘Jacqueline.’ (The Jacqueline had a carrying capacity of six cars and its service ended when the bridge opened to vehicular traffic.)

“I was the first truck to cross on that first day,” Mr. Watson added. “I think it was a two-and-a-half ton truck, a Maple Leaf—a General Motors product.” He recalled that southbound traffic crossed the one-lane bridge first on its way to Manitoulin.

“It was almost a day’s trip over there to Sudbury and the roads were pretty crooked and narrow,” Mr. Watson recalled. “They were just gravel roads and the hills were higher then. When I got to the hills I changed gears at the bottom to a lower gear because it was hard to change halfway up with such a big load.”

“It was pretty scary but I was young and didn’t think much of it,” he laughed.

His father had a contract through an agent called W.B. Plaunt to supply the mines with the eight-foot long logs that had to be graded and then creosoted.

“We had to pile them to have the inspector look at them. It was heavy work as there were no machines to lift them then,” he said.

Mr. Watson had a special “public carrier” licence for hauling goods including wool, cattle and feed once the family got out of the timber business.

In 1944 he married Dot Watson and the two eventually owned and ran the family general store.

In honour of Mr. Watson’s special crossing, he will again cross the bridge as a special guest in the classic car parade scheduled as part of the Friday evening opening ceremonies of Bridgefest this Friday, July 12 at 6:30 pm and he will also be present for the opening ceremonies at 7:30 pm on the east docks in downtown Little Current.