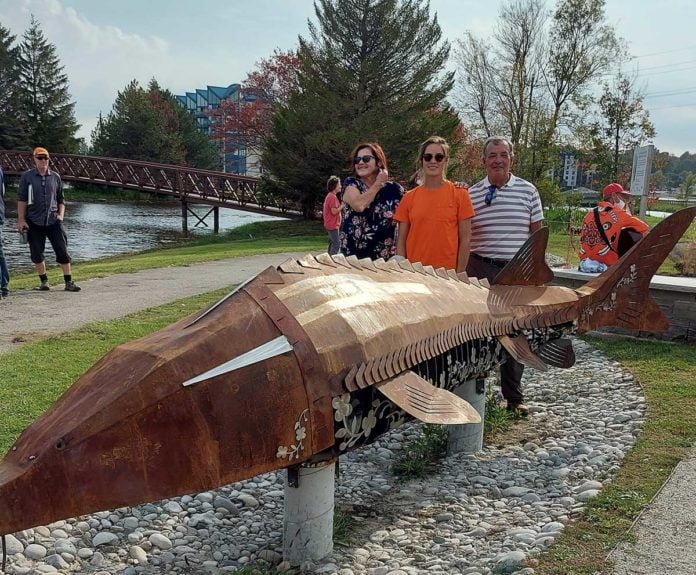 OWEN SOUND – The chair of the Gitche Namewikwedong Reconciliation Garden Project (GNRGP) cannot quite find all the words to describe a 15-foot-long grandmother sturgeon sculpture, created by Manitoulin Island artist and fabricator Kathryn Corbiere of One KWE, that was unveiled at the Reconciliation Garden located in Kelso Beach Park in Owen Sound.

“The sturgeon will look like it is swimming into the river. I can’t describe it any better way than to say it is beautiful,” stated Susan Stades Shank, chair of GNRGP, on Friday of last week, a day before the sculpture was unveiled at the park this past Saturday, October 2.

“Kathryn, an Anishinaabe-kwe artist from M’Chigeeng First Nation on Manitoulin Island, was selected to create the grandmother sturgeon sculpture at the Reconciliation Garden, and created the sculpture of Nookomis Gitche Name Kwe, whose sacred and iconic presence at the garden will serve as the physical, spiritual and cultural link to the traditional lands and waters of the Anishinaabeg,” says a news release from the garden committee.

Ms. Corbiere is a certified welder and fabricator, who owns One KWE, her fully equipped fabrication shop in her home community. She said at the unveiling ceremony Saturday, “this is special, it feels like forever since I talked to the committee about this sculpture. Thank you to the (GNRGP) committee and the United Way for letting me construct this structure.”

“It has not been an easy project from the start,” said Ms. Corbiere, who noted, “I have been in the steel fabrication business for the past seven years,” noting this project was very much an emotional and difficult project at times during the process.

She got emotional in telling the gathering, “my grandmothers were both survivors of the residential schools in Spanish. That is why this was such an important project to complete in their honour. But I didn’t do this alone. My parents had been part of picking the stones and florals from Manitoulin Island for the structure, and my partner who let me spend many hours working on this project.”

Ms. Corbiere explained she had used two types of metals in the sculpture, stainless and steel, and that the floral patterns on the grandmother sturgeon sculpture represented Ojibway culture. “The stones in the belly of the fish are representative of the eggs in the sturgeon, which is an endangered species of fish.”

“I’m so happy the way this sculpture turned out,” said Ms. Corbiere, explaining, “one detail that you don’t necessarily see on the sculpture, my grandmothers were both given numbers when they attended the residential schools in Spanish, and on the fish on either side of the fins are each of my grandmothers’ numbers, in their honour.”

“We thought of a garden,” said Ms. Stades Shank. “Owen Sound was doing a plan for the Kelso beach near the original Nawash Nation.”

The Pottawatomi River, which runs along the Kelso Beach Park, was to be a healing trail. The Town of Owen Sound agreed with establishing this garden, said Ms. Stades Shank.

After a request for proposals, Ms. Corbiere was selected to complete the sculpture. The sculpture left Manitoulin Island by the Chi-Cheemaun ferry over to Tobermory and to Owen Sound last Thursday, in time for the celebration Saturday in Owen Sound. 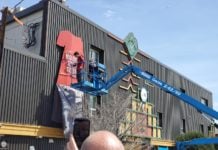