MANITOULIN—Manitoulin, the time has come to put your money where your beer goes, as the would-be proprietors of the Island’s first craft beer brewery, Split Rail, have launched a social media fundraising campaign on the popular Kickstarter website hoping to raise the last $55,000 they need to take the concept from dream to reality.

Andy Smith and Eleanor Charlton first decided to start a micro-brewery on the Island following the LAMBAC 2000 strategic planning sessions. “We thought it was a good idea,” said Ms. Charlton. “We began to research the concept.”

That research involved the onerous task of testing many different brews to fine-tune a recipe that would reflect Manitoulin’s unique character and discerning palates. “It was tough,” admitted the entrepreneurs. “We decided on a lager for a number of reasons,” said Ms. Smith. One of those reasons is that ales currently dominate the craft brewery circuit and the duo wanted something different but the decision was primarily made on the basis of taste. “It is a reflection of our own tastes,” Ms. Smith admitted. “But we have had a lot of people taste testing for us and we have been really blown away with the rave reviews we have been getting.”

The fledgling brewmaster’s research didn’t stop at their palates, however. Both proponents went to brewery school (yes, there is such a thing). They attended the Siebel Institute of Technology’s World Brewing Academy and were fortunate to be able to get plenty of hands-on experience at the Lake of Bays Brewery. “The folks at Lake of Bays have been really supportive,” said Ms. Charlton. “Darren (Smith) launched his brewery in 2010 and he has been immensely supportive.”

The duo were also fortunate to link up with brewmaster Glenn Fobes of Oakville. “Glenn has a ton of experience. He has been brewing beer for 30 years.”

With the experience of Mr. Fobes and the research conducted by Ms. Smith and Ms. Charlton, the perfect lager recipe came to fruition and the brewing team constructed a mini test system to start brewing and bottling test batches of the brew. “The test system has a 50-litre kettle, but we can only produce 30 to 40 litres at a time,” said Ms. Smith.

“We aren’t really much for tooting our own horn,” said Ms. Charlton “but the reviews we have been getting for our inaugural brew have been really over the top. It has us pretty excited.”

Although the plans for the initial size and capacity of the brewery are still somewhat variable, “a lot depends on the negotiations with Kagawong (the community that is seeking to lure the new business into making their community the brewery’s new home) and how they go,” said Ms. Charlton. “We do have a pretty good idea of what we expect will be the size.”

The business plan calls for an initial 15-hectoliter system, capable of ramping up to 200-plus cases of 24 bottles a week. “That’s conservative,” cautions Ms. Smith. “But we want to take it slow and careful at the start.”

There are a maze of government regulations and inspection criteria that have to be met before Split Rail can begin producing commercial quantities of its lager for sale. “It really is a complex system that will have to be navigated, but it is certainly manageable,” said Ms. Charlton. “But we can’t move ahead on that until we have a physical location and setup.”

The brewers have been very pleased with the support and enthusiasm they have been receiving from the Island community. “A lot of people have been telling us that they have thought about doing it 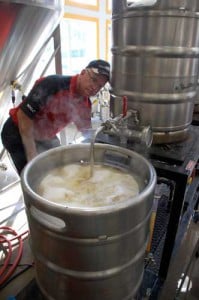 themselves,” said Ms. Smith. “We really appreciate that.”

The clock is ticking on the Kickstarter campaign—there are only 40 days in which to raise the funds. Ms. Smith explained that Kickstarter is the premier crowdsourcing site for fundraising through the Internet, but it has certain caveats.

“It’s an all-or-nothing proposition,” said Ms. Smith. “We have to raise the entire $55,000 to get the funding.” If the campaign falls short, no money flows, but if that bar is reached, Split Rail Brewery will start to become a reality.”

The campaign was launched this past Sunday, so as of today (Wednesday) there are only 36 days left to go. Donations of any size will put the concept one step closer to reality. 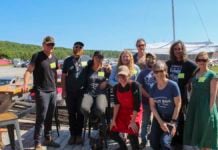 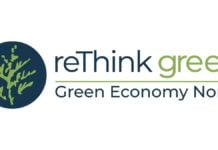 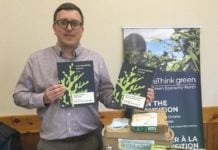 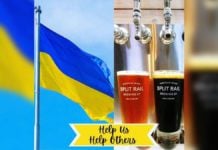 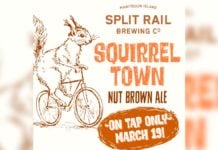 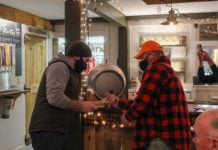