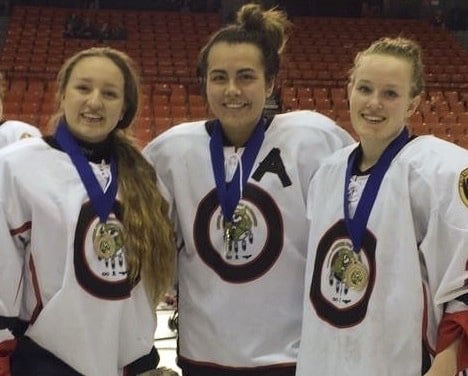 HALIFAX—Fresh off her national midget hockey win, M’Chigeeng’s Deidre Debassige is coming home with a silver medal around her neck from her fantastic showing with Team Ontario at the National Aboriginal Hockey Championships held in Halifax from April 27 to May 2.

After a slow start, the girls finished the championship game with a score of 3-2 for Saskatchewan. Although they outplayed and outshot Saskatchewan in the second and third period, they could just not place the puck in then net, placing them with a silver medal win for the second straight year.

Manitoulin was well represented on the Team Ontario squad as Deidre was joined with two other Island girls, Cheyenne Bates-Saucier, hailing from Wikwemikong, and Tasza Thibault-Tarnowski, with ties to Gore Bay, who played for the Ottawa Lady Senators AA.