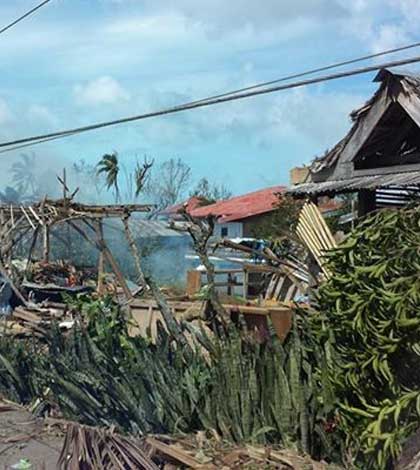 MANITOULIN—Typhoon Haiyan, the super storm that slammed into the Philippines, has left more than 1.9 million victims homeless and the death toll from the massive disaster has risen to more than 3,600. The Canadian government has pledged $20 million to the relief effort and two elite DART (disaster assistance response teams), complete with water filtration systems and a fleet of naval helicopters, along with a contingent of personnel expected to exceed 300 before the end of the month, are scrambling to assist those in need of relief in the two provinces worst hit by the storm.

The parents of Given Cortes, a Little Current massage therapist, both hail from areas that have been severely damaged by the storm. The storm took out cell towers and communication infrastructure, making it difficult for expatriates to connect with family and friends. “It was Wednesday before my mom got word that no one in our immediate or extended family were casualties,” he said.

Mr. Cortes received a photograph from his mother that showed the extent of the damage in the area he once visited when he was a child. “The last time I was in the Philippines was when I was 11-years-old,” he said. “It was pretty unrecognizable from the places I ran around and played while I was there.”

The community Mr. Cortes was visiting, and where some of his relatives still reside, lies just 60 kilometres from the sea. “You can smell the sea air if the wind is blowing the right way,” he said. There were three houses on the property where Mr. Cortes stayed, a summer building with bamboo and a taller wooden structure built on stilts should floods hit and then a sturdy brick home built to withstand the kind of winds that commonly accompany typhoons—although Haiyan was not your typical storm.

Mr. Cortes said he was more concerned about his father’s reaction to the storm than he was his own. “The relatives there are blood strangers, people I didn’t know myself personally,” he said. “You are obviously struck by the tragedy of the situation, but for me there was not as much of a personal connection as there is for my parents.” Mr. Cortes said that his father was much calmer about the situation than he had expected. “He was pretty confident that the brick house would be able to weather the storm,” he said.

Canadians have been pouring their support into agencies to help with the relief efforts for the largely impoverished nation. Mr. Cortes said that his father suggested that donations to the Red Cross would be among the better destination. “My dad said that if anyone wants to help out, then they should donate to the Red Cross rather than sending items to the area,” he said.

The government has pledged to match donations made by individual Canadians to registered Canadian charities responding to the crisis in the Pacific island country by December 6. Donations to date have topped $15 million. The top five listed charities are the Red Cross’ Typhoon Haiyan fund, UNICEF Canada’s relief efforts, World Food Programme, and World Vision. A full list of registered Canadian charities can be found at www.cra-arc.gc.ca.