The music was, as usual, melodic, interesting, festive and uplifting.

As usual with the Island Singers, the music chosen for presentation was challenging and, also as usual, the choral group delivered their signature complex, harmonies and their ability to sing in Latin (two pieces!).

But what was very new was the crowd of individuals who took turns directing the choir, politely passing one another en route to the director’s box from the ranks of the choir as they took their turns.

When Dorothy Anstice made formal her stepping down from the director’s role at the Spring Concert earlier this year (after nearly three decades in this role), and long-time accompanist Holly Scott also retired, the hunt was on for a new director and a new accompanist.

The hunt was a success with no fewer than three musicians agreeing to share the director’s role: Chris Theijsmeijer, Ray Scott and Ann-Marie Scott.

Samantha Cooper signed on as accompanist and so, for this year’s Christmas event, four new faces replaced the two retirees.

For Mr. Theijsmeijer and Ms. Scott, it was a short walk from their customary places in the choir’s baritone and soprano sections, respectively, as they have been choir members for many years, just as Mr. Scott had previously been (and now is once again) an Island Singer.

Lydia Burlein, choir chair and soprano section member, welcomed everyone at the beginning of each concert, noting in Little Current that she was pleased to acknowledge Ms. Anstice, the choir’s long-time director and Ms. Scott, for many years the accompanist “in the audience today and supporting our choir.”

Ms. Burlein introduced the trio of new directors and the new accompanist and made note that several new members have joined the choir.

“We hope that you are joyful and will enjoy our concert,” she concluded.And there was much to enjoy: the moving crescendo of sound as Mr. Theijsmeijer directed the choir through the Coventry Carol comes to mind as the choir built their sound to rafter-rattling limits, and then, just as carefully brought it back down.

The two choir couples, Ann-Marie and Ray Scott and Chris and Heather Theijsmeijer, came together in a quartet that covered the soprano, alto and baritone range to deliver one of the Latin pieces, O Magnum Mysterium. Maintaining beautiful harmony, the men and women deftly exchanged the melody line.

Two young women, both students at Manitoulin Secondary School (where they are also involved in the choral music), were the featured soloists in the Island Singers’ rendition of Go Tell It on the Mountain. Alexa Gordon and Jessica Jordison, both sopranos, were each featured.

They weren’t the only young people in the choir’s lineup: two more MSS students, Max Chapman and Brandon McCauley, were front and centre as part of the baritone section. (A third young baritone, Isaac Gosse, was not able to participate in Sunday’s event.)

The trio of directors has chosen an interesting mix of material that, as usual, dwelt heavily on sacred music for the Christmas season, but by no means exclusively.

The audience, for example, learned what to do with all of those gifts that can show up during the Twelve Days of Christmas (only keep the five gold rings) and, in a certain call piece following a well-earned standing ovation, were reminded songfully of all of the many, many, many ingredients absolutely necessary for proper Christmas cake.

The final piece in the formal program, All is Well, was a wish for peace and hope, a sung benediction really, that Mr. Scott directed and the choir presented with gentle authority.

We should all look forward to the Island Singers next event in the spring. 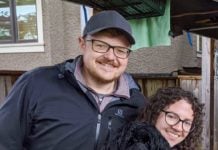 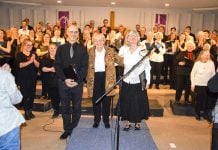 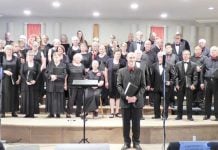 Journey to Bethlehem this weekend in Mindemoya 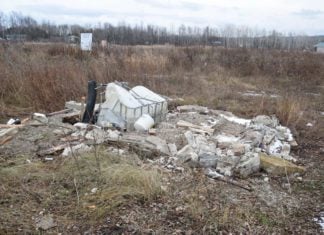