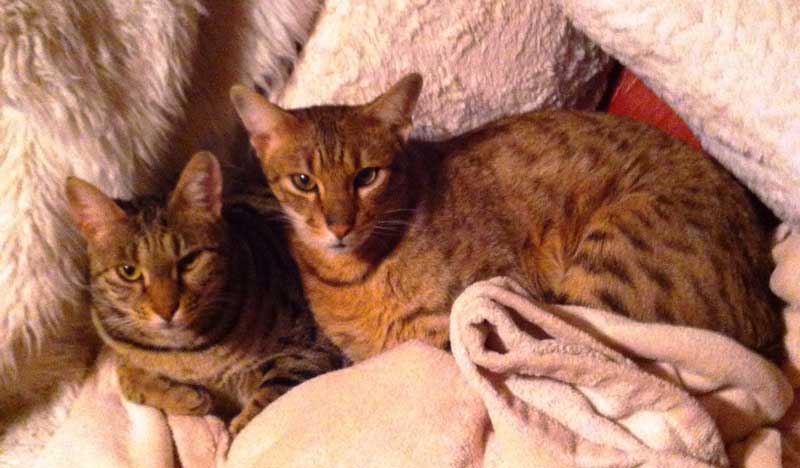 We wish to convey to the citizens of Bay Estates our deepest gratitude for your many calls, tips and support in helping us find our lost male Savannah cat Rusty. We are overwhelmed with the volume of calls since publishing our missing exotic cat article in the Expositor on August 14. Chris Brownlee originally photographed Rusty in late July on her property thinking it may have been a young cougar. This would photo would have made an excellent submission for a $500 Expositor reward had it been verified as such. Unknown to readers, the cat seen in that photo was but one of our two escaped Savannah cats. We were hoping that the newspaper article would have been able to locate and uncover both of them. The male cat near Bay Estates was a three-year-old F2 Savannah named Rusty who was roaming Bay Estates lakeshore properties hungry and disorientated. The other lost cat was a spotted F3 Savannah female cat named Tabitha whose whereabouts were unknown. We offered a $250 reward for each cat should someone manage to safely capture them. The fate of our cats was completely out of our control; however citizens of Manitoulin should never be underestimated when it comes to action!

Since the article, we would like to thank the many people who have called and responded to sightings within the Bay Estates area. On August 14 (after reading the missing cat article) I received an email from a South Bay neighbour a few streets away stating that a wandering spotted cat befriended the couple six weeks ago. They believed this spotted feline might be one our cats and had been hanging around their home for weeks. As it turns out, Dave and Shirley Nelder of Lonesome Pine Trail were very correct for they had located our dearly missed Tabitha. We owe the Nelders a sincere debt of gratitude for their kindness and neighbourly goodwill in swiftly responding given our circumstances. Rusty, the Bay Estates nomad, we thought would be almost impossible to catch. We were greatly mistaken! The elusive Rusty was caught in a raccoon trap last week by a very caring Bay Estates resident, Gary Desbarais, who was single-mindedly determined to catch Rusty on our behalf after reading the article. After days of setting traps and catching his share of skunks Mr. Desbarais gave us the call on August 20 excitedly proclaiming that Rusty was safely contained and safe in his house. We would like to bless Gary and his wife for their compassion and selfless effort trying to get our Rusty back for us given his skittish temperament. Yes, we are happy to have our pets returned but as we learned through this journey, lost and found cats are not the real story. In any context of loss, it remains the kind, persevering spirit of area Manitoulin residents such as Dave and Shirley Nelder and Gary Desbarais for helping fellow neighbours in distress that really constitutes the actual feature story of this article! Let us remember that The Manitoulin Expositor’s coverage of our story is also directly responsible for making this all happen. Whether you lose a pet, a wallet, your house keys or leave something behind at a Manitoulin store, you can rest assured that your situation of a missing item may only be a temporary condition. Should a loss misfortune become your reality, don’t be surprised by the swift personal response you will receive about your missing item for one fact is historically immutable living this side of the bridge—Islanders genuinely care about their community members!