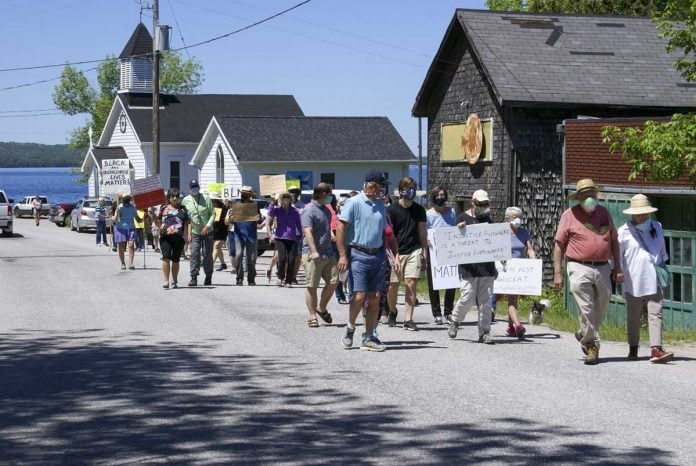 KAGAWONG – A large group of residents from around Manitoulin joined together this past Sunday to take part in a ‘Walk for Change’ event to show their concerns about the issue of racism in Canada and throughout the world.

“No one can deny that there is racism in Canada,” stated Sandy Cook, who along with Reverend Janice Frame organized the walk in Kagawong, which was attended by about 65 people. “It’s important that people not stay quiet on this issue; when we see behaviour that is not okay, it’s not okay to say nothing, to just stand by.” She said legislation needs to be enacted. “Trudeau taking a knee was good but not nearly enough.”

“Sandy Cook and I are encouraged by your presence here today, because by giving up part of your Sunday afternoon, you are saying that you too have been upset by the recent barrage of events that have pointed once again to the depth and breadth of racism in our country,” stated Rev. Frame to the gathering.
“You are standing up … publicly acknowledging the fact that that systemic racism is a reality in Canada. And you are standing in solidarity with Black, Indigenous, and people of colour in our country, adding your voice to their call for justice,” said Rev. Frame. “You are stepping out, choosing action over complacency, committing yourself to a movement that says, “yes, Black lives, Indigenous lives, the lives of people of colour do matter.”

Rev. Frame pointed out, “as a White person, I realize that mine is a place of privilege, a place of safety, a place removed for the impact of racism. So what is needed right now is for me to not talk, but to listen. To listen to those who understand what systemic racism is all about, because they live under its shadow every day.”

“To that end, I share with you the voice of Ontario Regional Chief RoseAnne Archibald, who represents 133 First Nations communities across the province,” continued Rev. Frame. She explained that on June 8, Chief Archibald released an open letter to Canadians, ‘Canada Must Commit to Action Against Systemic Racism.’

“Dear Canadians. We stand on the precipice of change. We are looking down an untraveled path that will lead us from the darkness of hate and racism into the light of a loving, caring and just society,” wrote Chief Archibald. “Will we finally have the courage to walk together and say enough is enough? After this immediate crisis is over, we must commit and follow through with the needed action so that it never happens again. This is the work required by all people in Canada.”

“Together, we watched George Floyd’s tragic and heart-wrenching murder at the hands of the Minneapolis Police on May 25, 2020. Two days later, Regis Korchinski-Paquet, an Anishinaabe-kwe/Black woman, fell to her death during a wellness check in Toronto, attended by the Toronto Police Service. Then, on Thursday, June 4, 2020, Chantel Moore, a Tia-o-qui-aht First Nation woman, was shot and killed by the RCMP during a wellness check in Edmundston, New Brunswick. These represent the types of tragic outcomes attributed to systemic racism toward Black, Indigenous, people of colour (BIPOC).”

“We stand with the Black community,” wrote Chief Archibald.

Rev. Frame read from the letter, “Canada is in the midst of an identity problem. To the rest of the world, Canada is one of the most peaceful, progressive, inclusive societies in the world. It is a society that the rest of the world envies. But the reality is systemic racism runs rampant and is deeply rooted in Canadian society. This is most evident in the race relations between many police services (RCMP, Sûreté du Québec, Thunder Bay Police Service, OPP) and BIPOC. Despite the mandate to protect and serve, the current policing system is often used to oppress our peoples, which is demonstrated by the over-representation of BIPOC in the criminal justice system. Calls by the Black community to defund the police is a call to action that we must examine and support.”

“I ask Canadians to be aware of how racism lives and moves and looks in everything around you,” wrote Chief Archibald. “Make a personal commitment to change the narrative by listening, challenging racism, educating yourself and sharing your power, space and platforms. Call upon your leaders to include the true history of how this country was founded. Include in the curriculum the past injustices inflicted upon BIPOC. Include the racist acts and pieces of legislation that helped to oppress BIPOC and continues to feed the colonial state, allowing only a select few to benefit. This is a moment to learn.”

“In the days ahead, we must hold onto our collective concern and do more than dream a new dream together,” wrote Chief Archibald. “We must create concrete plans that include investing in safety and security for everyone, and this means moving away from paramilitary organizations. We must construct the new reality rather than just talk about it or take a knee in protest. The real work is beginning, and that is the untraveled path that we must take.”

“Chief Archibald asks us to be aware of how racism lives and moves and looks in everything around us. All too often that awareness has been jump-started by death. George Floyd, Regis Korchinski-Paquet, Chantel Moore, Rayshard Brooks, Rodney Levi and countless other Black, Indigenous, and people of colour have died suddenly and violently as a result of systemic racism. To honour the life and memory of these men and women, I ask you to hold a minute of silence.”

“Chief Archibald asks if we will finally have the courage to walk an untravelled path together, a path that will lead us from the darkness of hate and racism into the light of a loving, caring and just society,” said Rev. Frame. “So, I ask you, will we? Will we have that courage?”