M’CHIGEENG—Integrity. Humility. Honesty. Passion. Respect. Sense of joy. These are the words that were constantly repeated to describe James Killeen as he was officially sworn in as Chief of Police for UCCM Anishnaabe Police Service (UCCM APS) on May 10 in M’Chigeeng. The high praise came from colleagues and co-workers past and present, as well as community members and leaders.

One such speaker was Order of Canada honouree Dr. Jeannette Corbiere Lavell of Wiikwemkoong, whose presence was requested by Police Chief Killeen. “I am honoured to be here today,” she said. “It was a pleasure to meet you last week.”

“It is good to have all of you here today to honour this special person,” said Ms. Corbiere Lavell. She told the gathering that when she was a young girl, her mother told her that a police officer was a protector and peacekeeper, to protect other members of the community.

Taylor Sayers, director of corporate services for UCCM APS and master of ceremony for the swearing in ceremony, welcomed everyone and thanked Thunder Earth Drum for the warmup. “There was a beautiful sunrise ceremony held this morning to honour James and his family and to welcome them to the UCCM territories,” she said.

Elder Bill Antoine of Zhiibaahaasing First Nation gave an opening prayer before Derek Assiniwe, chair of UCCM Police Services Commission, welcomed Chief Killeen and his family into the Island community. “I’ve had the privilege of working with James for the past year,” he said. “Nothing is easy for these officers. He brings a sense of joy and respect to the position of chief of police.”

Patsy Corbiere, chief of Aundeck Omni Kaning First Nation and UCCMM Tribal Chair called the new chief an exceptional leader. “There are expectations for every leader. You’ve proven your ability, not just to be an average leader but an exceptional leader. This is a new area and way of policing. It’s not Sudbury and there have been challenges. You have built relationships, implemented positive changes within the UCCM Police Service, inspired others, structured partnerships, shared your own work experiences and abilities, demonstrated effective communication with elders and community members and created accountability in a short period of time,” she told Police Chief Killeen.

“It wasn’t easy. In the past year as the acting chief of police, you may have felt that you were thrown into a brick wall, but you changed those difficulties into challenges and tore those bricks down one at a time. Although it was stressful at times, always remember you’ve made a positive difference,” she added. “As you move forward in your career as the UCCM Police Chief, may the Creator protect and guide you. James, you have been on an incredible journey in policing. We are extremely grateful to you for landing on the traditional territory of Mnidoo Mnising (Spirit Island) as our new chief of police. Congratulations.”

Chief Kells appreciated the inclusion of a traditional sunrise ceremony in the event. “It’s something we need these days,” she said, wishing the chief of police and his family the best.

Both Chief Mishibinijima and Chief Endanwanas added their congratulations. “We’re really glad to have you here. Welcome to the UCCM community and the Island community,” said Chief Kells.

M’Chigeeng First Nation Ogimaa-kwe Linda Debassige was unable to attend the ceremony due to a death in the family.

Brad Mack, staff sergeant and director of operations for UCCM APS thanked everyone and welcomed Police Chief Killeen’s family to the community and to the police family on behalf of the service. “It’s been about a year since James took over this position,” said Staff Sergeant Mack. “We’ve gone through significant change over the past few years.”

It’s important, he pointed out, to be able to put trust in their chief and Police Chief Killeen, “brings many good qualities. He has engaged with countless community members, and James is a compassionate person, dynamic.” He has shown integrity, works hard and is dedicated, said Staff Sergeant Mack. “We’re looking forward to the next year. Congratulations, James, on behalf of all of us.”

Ms. Sayers acknowledged it hasn’t been an easy start for Police Chief Killeen. “It has been a challenge,” she said. “You’ve done a great deal representing the communities. James, you have exceeded expectations with your many accomplishments over the past year.”

“You put your feet on the ground and stood tall. You really earned this. The Creator doesn’t give us anything we can’t handle. This is where you were meant to be, to lead our police service,” Ms. Sayers said.

Best wishes and congratulations were presented to Police Chief Killeen in a video, compiled by UCCM APS Executive Assistant Irene Altiman, that included former co-workers from Greater Sudbury Police Service (GSPS) talking about his sense of humour and sharing footage of Police Chief Killeen dancing. The video also included a brief tribute from spouse Lori Killeen. “We’ve been together for the past 28 years and you’ve never backed down. You always took up for others. For the hard work, be proud. We love you,” she said.

Albert Beaudin, the inaugural chief of police of the Anishinaabe Police Service, who retired 12 years ago, also offered words of encouragement. “Congratulations,” he said. “You have a big enough crew with the chiefs and the councils and community behind you. Congratulations on the respect. You will do an excellent job.”

“I thought about preparing a speech, but I speak from the heart,” Police Chief Killeen told attendees. “Welcome everyone here today. Thank you drummers. That was amazing, fantastic. And Bill Antoine for the opening prayer.”

He applied to be an officer unsuccessfully in 1992 so and returned to school in 1995, becoming a sign language interpreter. “The man in my video using sign language was Joe Gignac, who was my professor. Joe is a hearing impaired man who immersed me in his culture and language. He’s an amazing and resilient person and I learned a lot from him.”

In 1997, Police Chief Killeen successfully completed testing and interviews to become a constable for the Sudbury Regional Police (now GSPS), but was placed in a hiring pool. When the opportunity arose once again in January 1998, he wasn’t going to make another attempt. “Lori secretly signed me up,” he said. He thought he had a weekend of camping and snowmobiling with friends ahead of him that weekend but his wife told him he had testing that Saturday. She signed me up, he said. “We actually argued about it because it was over $360 and our rent was the same.”

He hadn’t believed in himself but his wife did. “Lori said, ‘you’re going to do it this time. I believe in you. You got this.’ And that was the year I got hired. Thank you believing in me and supporting me,” he said. “Lori and my children, Braedan and Alana, have supported me throughout my entire career.”

Braedan was born less than a year after he was hired by the Sudbury police service, said Police Chief Killeen. “I received a lot of support from GSPS but I felt great pressure to work hard. I immersed myself in my work, drug units and the intelligence unit, but without my family and their support I wouldn’t have been able to do this.”

The week before the swearing in, Chief Corbiere had contacted Police Chief Killeen to talk about an issue in the community. He met with her at the Four Directions Complex in Aundeck Omni Kaning, where a conference on Missing and Murdered Indigenous Women and Girls was underway. It was at the conference that he met Ms. Corbiere Lavell. “It was an honour to meet her,” he said.

“I was sitting afterward, and thinking, ‘why would I be asked to speak before Jeanette Corbiere Lavell, who has received the Order of Canada?’” said Police Chief Killeen. “It was an honour to meet her.”

The conference organizer asked him to speak. “I provided some information on my background and then talked about the problem with drug trafficking and human trafficking,” he said. “This is killing women, not just First Nations women, but all women. When they are involved in these activities, they lose their souls and spirits, emotionally, physically and sexually. It’s slowly killing them.”

As the ceremony came to a conclusion, all police staff joined Police Chief Killeen for photographs. “A lot of people are very proud of the UCCM and their team building. We’re moving forward,” said Ms. Sayers. Gifts were then presented to the chief of police before all active and former police officers and veterans gathered as an honour song was performed by Thunder Earth Drum to conclude the ceremony. 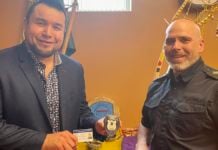 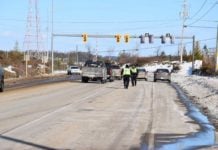 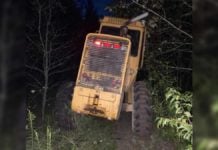