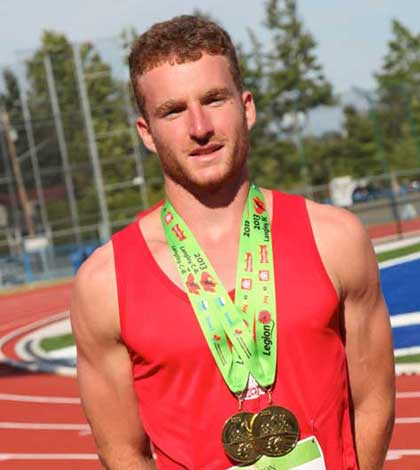 EVANSVILLE—Joseph Maxwell of Evansville, not only garnered two gold medals but set national records as a part of the Ontario team that took part in the Royal Canadian Legion National youth track and field championships.

“We’re pretty proud of him,” stated Robert Maxwell of his brother’s achievements in an interview with the Recorder on Monday.

The national championships were held in Langley, British Columbia August 7-13.

Mr. Maxwell, who is 15 and competed in the under 16 category at the nationals, won two gold medals, one in the shot-put and one in the discus. In the four kilogram shot-put competition, his record throw was 19.66 metres, breaking the record of 19.24 metres he set at the same event last year. He also threw the one kilogram discus 63.22 metres, which broke the previous national record of 58.70 metres set in 2001.

Mr. Maxwell’s father, Steve, also informed the Recorder by an email message that his son, “was awarded the Jack Stenhouse award for the top male athlete of the overall championship.”

As he has told the Recorder in previous interviews, Mr. Maxwell says he has set his sights on possibly going to a large university or college and has the Olympic Games in his crosshairs. “All of this is in my mind, certainly, but it’s one step at a time,” he said.