BILLINGS TOWNSHIP—Interest in bird watching has increased dramatically since the start of the COVID-19 pandemic but has long been an activity enjoyed by those who live on or visit Manitoulin Island. It gets people outdoors and puts them in touch with that natural world, and you don’t have to be an ornithologist to enjoy it. But what happens when a rarely seen bird appears in your backyard, far from its typical habitat?

That’s what happened to Phyllis and Bob of Billings Township about two weeks ago. Phyllis loves to watch the birds from her kitchen window. She has several feeders set up in her backyard, which is visited regularly by pileated woodpeckers, crows, mourning doves, chickadees, even ducks. When she first spotted the Lewis’s woodpecker she has since dubbed ‘Meriweather,’ she knew he was special.

The name refers to Meriweather Lewis, of explorers Lewis and Clark who surveyed the areas bought by the United States as part of the Louisiana Purchase. Meriweather Lewis brought a specimen back from their expedition and gave it to Alexander Wilson, a pioneering Scottish American who painted birds before Audubon did. He named the species scientifically (Melanerpes lewis), based on the specimen given him by Lewis.

It took Phyllis a couple days to identify the bird. “He was perched, which was unusual behaviour for a woodpecker,” she said. “I kept going through my field guide front to back. Finally, one morning I was out and he was pecking, so then I was pretty quick to identify him.”

The Lewis’s woodpecker is unusual for a woodpecker, said Bruce Kirkland, an ambassador with Ontario Field Ornithologists’ rare bird ambassador program. For one thing, it’s a flycatcher, but it also eats ants (like a northern flicker). “You’ll often find them on the ground eating ants. This bird has a more wide-ranging interest in food.” 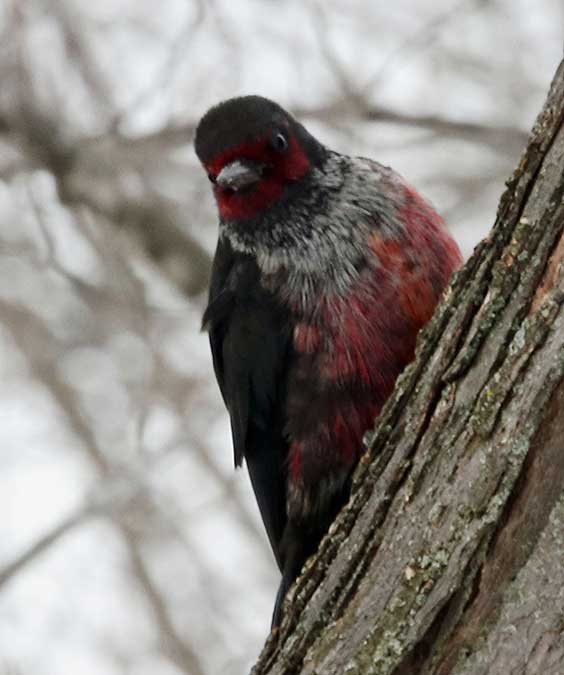 Its colouring is unique for a woodpecker, with a dark olive green back and small patches of red around its beak. It’s the breast that makes him stand out, said Phyllis. It’s red, with hints of pink and silver.

The bird’s normal range is the west coast of the United States and British Columbia. They don’t generally venture much further east than western Alberta and even then, it’s during the summer season. “They’re mostly found in the west into the interior a bit,” she said. “I’m told there’s only been two sightings in Ontario in 20 years.”

Mr. Kirkland said the bird is probably from the northern population of Lewis’ woodpeckers, likely British Columbia or Washington. “The southern population in the western United States are short term migrants,” he explained. “The ones in the north migrate further distances.”

Lewis’s woodpecker is not endangered but is a species of concern in Canada, with only about 1,000 birds remaining in British Columbia.

When a rare bird shows up in Ontario, it generates a lot of interest. After she determined that Meriweather was indeed a rare sight, Phyllis invited a friend over to have a look. They reported the sighting with photos on a Sudbury-Manitoulin birding Facebook page. “Anybody who’s really into birding, it caught their attention,” she said. “From there people screenshotted it and posted it on other sites. But some of the comments were from OFO and after I read the posting I reached out.”

The OFO Rare Bird Ambassador program was developed to coordinate access to rare birds with property owners to ensure a positive experience for all. Ambassadors help homeowners develop a plan for visitors and assist with parking, making sure people aren’t blocking driveways, that people don’t go beyond the marked viewing area.

“We help with logistics, letting people know not to post the address publicly,” said Mr. Kirkland. “If people post exact address these poor folks would get people showing up at all times, showing up in front of their house and we don’t want that experience. We want them to be really happy.”

You could not find people more accommodating than Phyllis and Bob, he added. “But they needed some guidance and some help from our organization. One of the things we do is help set up a donation jar and a guest book, things that make the experience more enriching for the homeowners and it’s turned out well for them.”

“We had 60 people yesterday (Saturday) at the viewing arranged by Ontario Field Ornithologists,” Phyllis told The Expositor. “It was amazing and everyone saw the bird and was thrilled. We have had many donations of money, most of which will go to the Manitoulin Nature Club.” 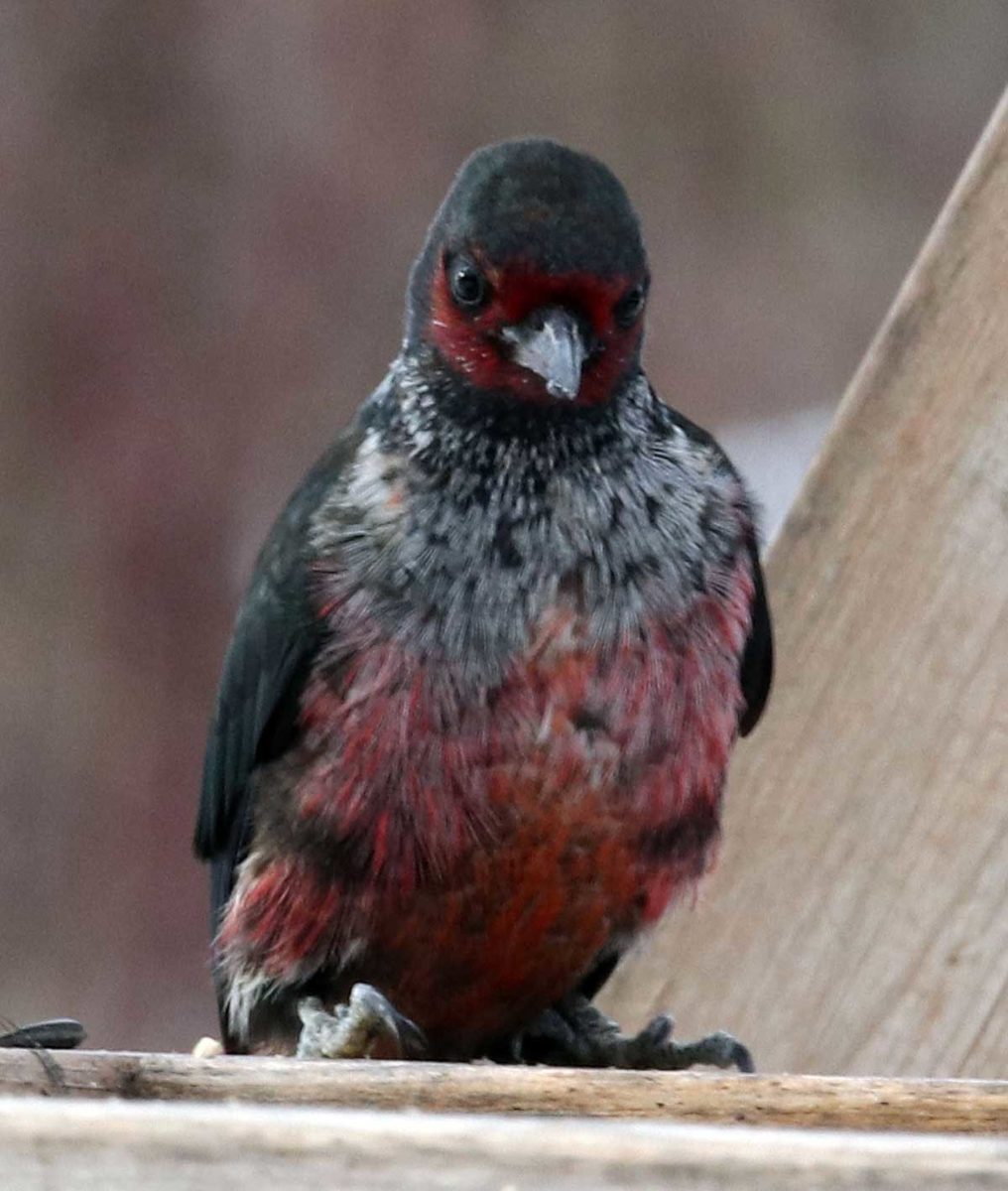 She has also been gifted various types of bird seed, a beautiful suet feeder, a book on hawks, among other things. Since Meriweather was definitively identified on January 13, he has had 105 visitors, including members of the Manitoulin Nature Club and birders from Sudbury. Other enthusiasts travelled from as far east as Ottawa and as far south as Leamington and Point Pelee.

“This program is great and Phyllis and Bob are the most fantastic, welcoming people,” Mr. Kirkland said.

Stressing the bird and causing it to leave was a big concern for Phyllis and OFO helped with that decision. “I was very concerned as to whether I should open this up,” she said. “I didn’t want the bird to leave, because I know how important it is for the bird to eat to survive right now and if he got scared away from this great resource, because I have everything imaginable for him right here including mealworms as of this morning, somebody brought a little container from Sudbury at my request. We just want him to build up his strength so that whatever the rest of his journey holds, he’ll make it.”

We probably won’t know the bird’s ultimate fate, said Mr. Kirkland. “In the past when a Lewis’ woodpecker has been recorded way outside of its breeding grounds or migration grounds, if it shows up and has a good food source, it tends to stay for weeks. It may even stay the winter, but there are other factors. It could be predated by a hawk. It could die of diseases we don’t even know it has. Perhaps the birds that wander the farthest away from where they should be, maybe they’re harbouring some sort of disease. It’s difficult to really say and that’s the mystery of it. Some of these stories end badly. Especially if you have an emotional attachment to the bird. It’s tough being a bird. They’re not as long lived as other creatures, like us. One day, she (Phyllis) might come out and it’s gone and she won’t know why.”

Anyone who is interested in respectfully viewing Meriweather can contact Phyllis through the Manitoulin Nature Club email: manitoulinnatureclub@gmail.com.