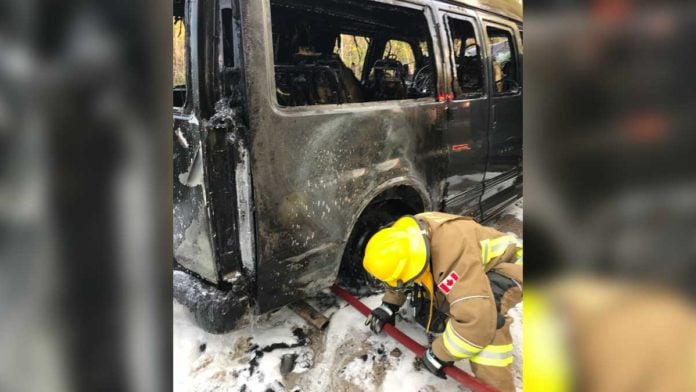 KAGAWONG—A Kagawong couple is fortunate that they, along with their home and valuables were not destroyed when their van was engulfed in a fire. Although the vehicle was fully engaged when Billings Township Fire Department volunteers arrived on the scene, the couple was very impressed with the firefighters’ quick response.

“The firefighters were here in less than 15 minutes after the call. It was a really fast response,” stated Alin Lefebvre who, along with his wife Betty Ann, own Bridal Veil Variety Store in Kagawong. “They saved the car from blowing up,” he said, explaining, “I was worried about the gas I had in the van. There was still 100 litres of gas in the van at the time of the fire. It could have been an environmental mess.”

Billings Fire Chief Martin Connell said the fire took place on the evening of Wednesday, October 5 on Grandor Road (the Lefebvre’s home). “We had received the call of the fire at 5:42 pm about the van, a 2013 GMC Explorer van, that was on fire. They (Lefebvres) had just got home from driving the vehicle.”

“Alin had been unloading the van when he noticed smoke coming from the tire, and the wheel was on fire,” said Mr. Connell. The vehicle had been parked close to the Lefebvre house, “and Al got in and drove the vehicle away from the house.”

“Our firefighters responded quickly and were on the scene in 11 minutes after receiving the call out, but the van was fully engulfed in flames,” said Mr. Connell. “We got water on the fire in under three minutes of staging. The fire was quickly extinguished, but the van suffered a total loss due to fire damage.”

“The fire had started at the rear passenger well wheel,” said Mr. Connell. Mr. Lefebvre had noted that he just came back from a trip with the van and he noticed smoke coming from the rear passenger well. Mechanical issues such as stuck brakes can overheat the wheel to the point of melting the brake lines and axle seals causing break fluid and axle lubricant to catch fire on the hot surfaces.

Mr. Connell noted, “vehicle fires are inherently dangerous and present dangers ranging from exploding gas tanks, exploding tires, exploding shocks and struts, exploding bumper shock absorbers as well as airbag cylinders. The smoke is also extremely toxic. The fire department was quick to deploy a foam agent to the vehicle, to stabilize and gain access to the engine compartment to disconnect the 12v power supply to render the airbag system safe. Safety officer and firefighter Bill Orford noted that everything was powered by the 12v system and was turning on and off during the fire. The lights were flashing, and horn was sounding as well as the wiper blades were turning on and off.”

“The fire was extinguished in quick time and we let the vehicle cool down and checked for hot spots using our T4 Max Bullard thermal imaging camera,” said Mr. Connell. “This unit is extremely sensitive in detecting hot spots after a fire and can speed up the process of what we call overhaul.”

Mr. Lefebvre explained, “I found my wife Betty Ann’s purse the next day where the seat was, and all the other stuff from the fire. There was $1,000 in the wallet inside, but nothing was melted.”

“We were kind of lucky that the fire didn’t get into the fuel tank,” said Mr. Lefebvre. He and his wife had come back home from shopping in Gore Bay when the fire occurred. When he noticed the smoke coming out of the tires, he moved the vehicle away from the house, and removed a 20-pound propane tank from the vehicle.