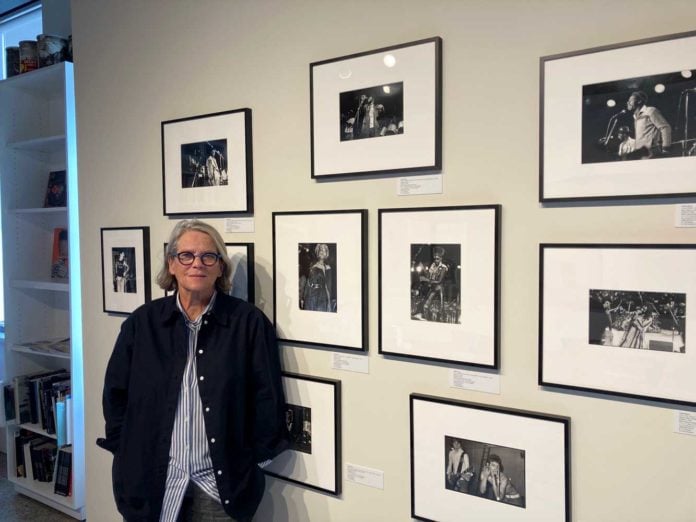 GORDON—Isobel Harry, a Gordon/Barrie Island photographer and journalist (who works as a freelance reporter for The Manitoulin Expositor) has photographed the likes of musicians Bob Marley and Teenage Head. She currently has many of her photographs on display at the Stephen Bulger Gallery in Toronto.

“There is a small display of my work in the reading room of the gallery, the anteroom from the main gallery,” Ms. Harry told The Expositor. The show opened on September 10 and closes October 15.

It was a long process to get her photographs into a gallery like this, said Ms. Harry. “I had an extensive archive of stuff from the early 1970s to, say, the early 1990s. In those days, I would shoot a lot of stuff: performances by artists, music, self-portraits, and had many published and shown. I kept all the proofs and negatives of the photos, archived all these years. I had no idea this was going to happen.”

About six or seven years ago, Ms. Harry approached Stephen Bulger, who has one of the leading galleries in Canada. He is a seller of photographs and his gallery is a commercial one. There wasn’t a lot of interest, until Ms. Harry’s partner Bert went to see Mr. Bulger and talked to him about her work.

“All of a sudden he seemed interested,” Ms. Harry said. “We talked and he said, ‘why don’t you make an inventory of what you have.’ Because of everything I do on the Island, it took me six years to make a complete archive of all my photographs. The whole time Stephen was very supportive. He became like a cheerleader and told me to keep going.”

She finally finished her inventory list and sent it off in February. They met in March and Mr. Bulger is now in possession of a lot of Ms. Harry’s materials. “There is a small display of my stuff,” she said. “He represents a lot of photographers, probably about two dozen.”

Ms. Harry’s curiosity as a young photographer was intense, compelling her to capture what she saw in people’s faces, in her own face, allowing her to discover the artfulness in life through her camera. Everything became subjective, filled with her own emotions. Each portrait recorded feelings made tangible in print and each performance made the symbolic visible.

“My photos were also about what moved me visually,” she said. “It was a feeling, an intention to carry the camera and shoot what was there. Curiosity, and just always carrying the camera, reacting to what was around me, photographing where I was. Documenting, but also hoping to reveal something of an inner life.

Born in Ottawa, Ms. Harry graduated from Carleton University with a B.A. in English and French literature. After hitchhiking around Europe with a backpack and her best friend, she settled in London, where she was hired by Time Out magazine and began writing columns and doing paste-ups in the layout studio. Her first published article was about London’s new women’s lib groups.

She returned to Canada, settling in Toronto and finding work at A Space, an artist-run gallery, the first of its kind in the city, if not the country. There, Ms. Harry was handed her first 35 mm camera and assigned the job of documenting spaces in the city that were suitable for artists and performers. Having previously only used a Kodak Instamatic, she ruined her first outing by opening the camera without first rewinding the film. Despite losing that first roll, she knew that from then on, the camera would be her backstage pass to everything interesting.

At A Space, photographer David Hlynsky enlisted her help to build the darkroom and taught her how to process negatives and prints in the chemical bath. Soon after, Ms. Harry participated in her first group exhibition in the upstairs gallery.

When Toronto’s punk scene exploded at the Crash ‘n Burn club in the summer of 1977, Ms. Harry photographed local bands, including the Viletones, Teenage Head, the Curse, and the Poles, among others. She captured images of Fashion Burn, a witty catwalk of homemade punk.

After several visits to Jamaica beginning in 1975, she travelled back to the politically explosive city of Kingston in April 1978 on her first ever photo assignment to cover the historic One Love Peace Concerts for the Toronto Star Weekend magazine. The years 1976 to 1980 were the most violent in the country’s history, culminating in over 800 politically motivated gun killings in the 1980 election year alone, carried out by enforcers in the city’s ghettos, armed and paid for by the two main political parties to wipe out their opposition.

Ms. Harry was able to photograph Bob Marley at the I Kingston at the Peace concert. Upon her return to Canada, she began an association with Canadian reggae band Truths and Rights, serving as photographer and publicist for several years. She promoted Caribbean music through major profiles and cover photographs while associate editor at the Canadian Composer and wrote think-pieces for cultural news magazines Centrefold and Fuse. Jamaica changed her consciousness of the world and her place in it.

In 1989, Ms. Harry began work in the field of human rights, first with Peace Brigades International’s Central America committee. In 1992, she began work with PEN International (PEN Canada), first as international programs director and then as executive director until 2010, alongside committed writers who advanced the organization’s mission to defend freedom of expression and celebrate literature in over 100 countries. She advocated on behalf of political prisoners, particularly imprisoned and exiled writers and journalists worldwide, and for refugee rights, at the United Nations Commission on Human Rights in Geneva and New York and before governments internationally.

“My photographs will be in series, the first one music and musicians,” said Ms. Harry. “I did a lot of photographs of reggae musicians Bob Marley, Peter Tark and some from England when they would come to Toronto. I loved music.”

She’s done a lot of digital photography since 1996, when she started to vacation at an old cottage on Lake Manitou. “I haven’t been able to figure out how to print right but one day I would like to address that,” she said. “I will have more series of photographs in the gallery, with different themes.”

“To be honest, part of the reason I’m keen to be represented by Stephen is that he knows the business and he thinks some of my photographs can sell,” Ms. Harry added.