﻿LITTLE CURRENT—Ken Ferguson has been recognized for his many years and impact on farmers markets on Manitoulin Island by the NEMI Farmers’ Market.

“It is time to recognize Ken Ferguson for his impact on marketing from years past to the present,” said Laila Kiviaho, treasurer of the NEMI Market at the group’s general meeting, held earlier this month. “There is no doubt that he has the longest service record for farmers’ markets on Manitoulin. He has continued through many  years in various capacities from marketer to executive roles. He was manager at the market in Little Current for a number of years. He took over after the retirement of Glen Cannard and continued when NEMI Farmers’ Market broke away from the Manitoulin Farmers’ Market Association Inc. in 2007.”

Ms. Kiviaho explained, “Provincially, Ken was a director on the board of Farmers’ Markets Ontario for a number of years. We have all benefitted from his experience on the board.”

“Ken is a people person,” said Ms. Kiviaho. “Customers and vendors come to him with questions, concerns and seeking advice. You will notice that he is rarely alone at his table. He is tactful. When I get upset about some issue, I take it to Ken, and he calmly diffuses the situation. He is a true helper with the interests of vendors at heart. He helps physically and is there for vendors to encourage their efforts.”

Ms. Kiviaho added, “Ken puts self-interest on the backburner and keeps the needs of others first. He is a dedicated marketer, a community-minded leader in Little Current.”

Mr. Ferguson, who said he is now a helper at the NEMI market, explained, “in the middle to late 1980s my (late) sister-in-law Betty (Ferguson) was always telling me about the farmers markets’ in Kitchener-Waterloo. So, I decided I would see if there were any like-minded people that would be interested in looking at having markets locally, and was lucky to find several people. I made arrangements to talk to interested parties in Gore Bay, Carnarvon, Assiginack, Howland and Little Current who all thought the farmers’ market would be a good idea. Then we brought this forward to the councils and they agreed it was a good idea.”

However, “no one had any money or space to hold a market,” said Mr. Ferguson. “Bob Chorney, who was with the Ministry of Agriculture Food and Rural Affairs, helped out and assisted with getting things started. We held an organizational meeting at Manitoulin Secondary School. From there a board was formed and three markets were opened in Providence Bay, Gore Bay and Little Current.  The organization decided to call it the Manitoulin Farmers’ Market Association.”

“Esther Taylor Spadzinski, who I think at the time was the economic development officer in Carnarvon Township, managed to get support through a program for Employment Insurance recipients to make vendors tables for all the markets. Carnarvon hosted this program,” said Mr. Ferguson.

Mr. Ferguson pointed out the market held in Little Current was initially held in the downtown area parking lot beside the Canada Post Office. From there, the market was held on Bousquet Realty property, and then the Bank of Montreal property, where it is still based. The town supports an expanded market by orienting a waterfront pavilion that was being built so that the open side faces Water Street directly across the road from the Bank of Montreal location.

On behalf of the NEMI Farmers’ Market group, Ms. Kiviaho presented a 1,000 piece jigsaw puzzle to Mr. Ferguson, which she had put together and was framed by Charlie Pratt. “Ken deserves all the recognition he receives for his efforts with the farmers’ market.” 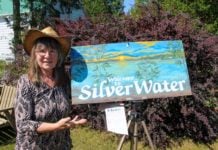 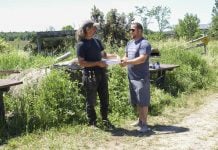 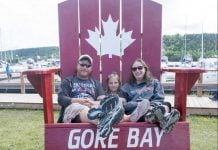 Something for everyone at Gore Bay Harbour Days this weekend 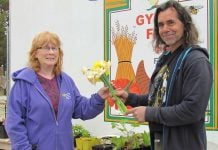 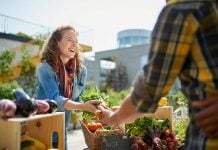 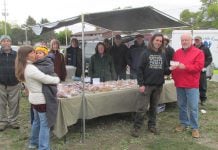