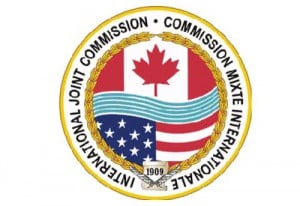 LITTLE CURRENT—This Sunday, July 15 marks the International Joint Commission’s (IJC) visit to Manitoulin and it is the last chance for Islanders to share with the six Canadian and American commissioners their thoughts regarding low water levels in Lake Huron.

“We certainly need people to come out and voice their concerns,” said Therese Trainor of Kagawong, secretary of the Manitoulin Area Stewardship Council. Ms. Trainor and the rest of the council have been working since February to have the IJC commit to holding a hearing on Manitoulin.

The purpose of the hearings is to have people comment on the findings of the International Upper Great lakes Study Board, which was released at the end of March.

As reported previously, when it came to the study of Lakes Huron and Michigan, the board chose to focus, at the direction of the International Joint Commission, on “the feasibility and implications of raising water levels by means of restoration structures in the St. Clair River to compensate for past natural and human-induced changes,” the report states.

Restoration structures included sills and underwater hydroelectric turbines that would come at a cost of between $30 and $70 million and could upset the natural spawning grounds of the endangered lake sturgeon. It would also take upwards of 20 years for such a commitment to take place. The findings state that while restoration would increase water levels at low points in the lake, it would also mean raising the levels to an “extreme high” in southern ports.

Adaptive management was recognized by the International Upper Great Lakes Study Board as “having an important role to play” through six initiatives: strengthening hydroclimatic monitoring and modeling; ongoing risk assessment; ensuring more comprehensive information management and outreach; improving tools and processes for decision makers to evaluate their actions; establishing a collaborative regional adaptive management study for addressing water levels extremes; and promoting the integration of water quality and quantity modeling and activities.

Jim Nies, a MASC member and seasonal resident of Kagawong, told The Expositor he had just returned to Manitoulin after 10 days in Wisconsin, his home state.

“The drought there is worse than ever—worse than in the days of the dust bowl,” he said. “It’s an unrelenting heat wave and it hasn’t rained since March. All across the midwest, it’s burning up.”

“I believe that climate change is finally manifesting itself,” he continued. “The environment is suffering. There’s no precipitation and lots of evaporation, which is devastating to the Great Lakes. Some call me an alarmist, but things are grim. All predictions are saying that climate change will be patchy—with times of extreme drought and then high precipitation— which we’re seeing now.”

“The IJC is stuck in a paradigm of 30 years ago—their thinking has not caught up with reality,” Mr. Nies added. “It’s essential for people to know we are in a time of crisis. We need to declare a state of emergency and do everything possible to save our lakes, realizing it may not be possible to keep them in the state they are now.”

“The Study Board makes the argument in its report that there are fluctuations in water levels, but over the past 15 years the levels have been on a steady decline,” he continued. “It’s time for the people who are in charge to wake up. The argument ‘to just let nature take its course’ just doesn’t hold water anymore. The Great Lakes are no longer natural, with the constant dredging of the St. Clair since the 1930s and the St. Lawrence Seaway.”

For those who wish to comment at the hearing on Sunday, registration will begin at noon in the upstairs hall of the recreation centre, located on Highway 6 in Little Current. The hearing will begin at 2 pm, beginning with a presentation by the IJC and comments from the six commissioners. Following that, names of those who registered will be called to come forward and speak. Copies of photos or other ‘evidence’ is also welcomed by the commissioners, in either hard or electronic format. For those who cannot attend the hearing, but wish to comment, word documents and pdfs can be uploaded at www.ijc.org/iuglsreport.