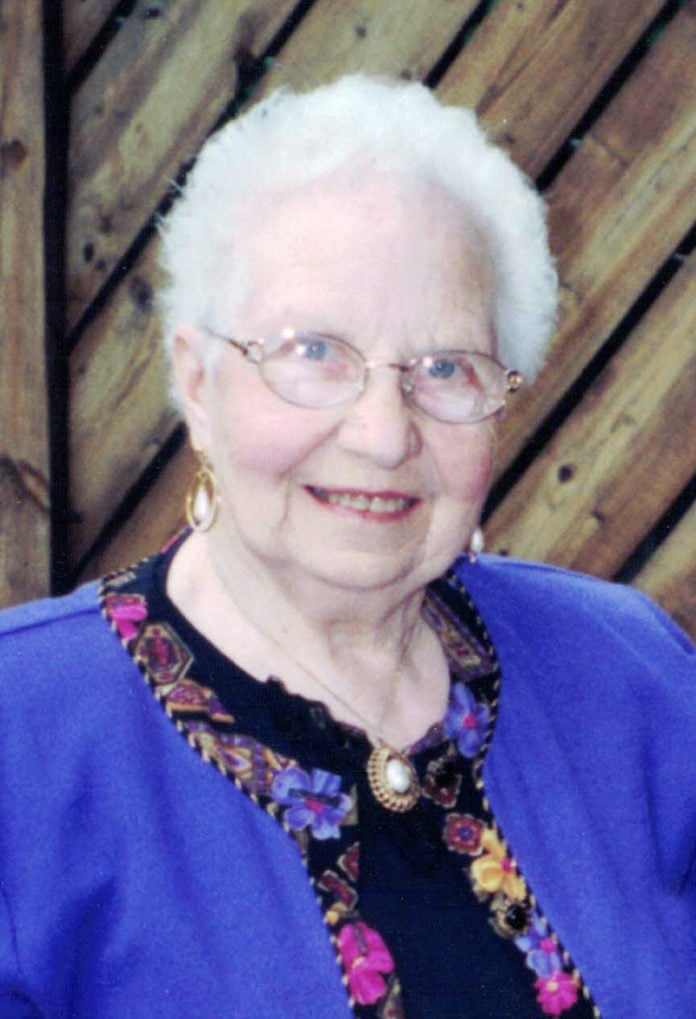 LENNA McCORRISTON
Born Lenna Lewis, May 25, 1927 to Earl Lewis and Dora (nee) Marshall of Campbell Township, Manitoulin Island, Lena (Lewis) McCorriston would have been 95 years old this month. Raised a farmer’s daughter, Lenna attended a one room schoolhouse with her siblings. Upon graduating high school, she became the teacher in a one room schoolhouse, educating children from grades one to eight. In her teens, she would go to house parties with her younger brother Eldon as her wingman. She first met her future husband Howard through her brothers Marvin, Rene, and Jim as they would bring him over to the Island for the weekend after working in the mines together in Sudbury. Howard asked his friend Marvin (Lenna’s brother) to introduce him to Lenna, but he said she was a stuck-up teacher, so he had to get introduced by a first cousin of Lenna’s. She later became the wife of a miner and continued teaching various grades in larger schools in the Sudbury area and selling Tupperware, all while raising their four busy boys. They built a number of homes in Sudbury but eventually settled on Margaret Street in Sudbury beside Lenna’s brother Jim. They were also close to her brothers Earl Jr. and Rene in Sudbury. Prior to owning a camp on Manitoulin Island, they would stay with Lenna’s sister, Ilene McMillan, and with no daughters of her own, she became very close to Ilene’s daughter Jeananne. She got to know her baby brother Carl Lewis when he lived around the corner in Sudbury and he hosted them on Manitoulin and when Carl came to visit her in Kitchener. Family was important to Lenna. She, her husband (Howard McCorriston), and four sons (Terry, Ross, Mark and Brian) hosted many guests in their home, visitors to the camp on Manitoulin and vacationing using their motorhome with her parents, and other extended family to various destinations. She treasured time spent with her grandchildren and great-grandchildren; snuggling, telling stories and playing cards. They now have 11 grandchildren and 14 great-grandchildren with another one due in September. The biggest event that Lenna was proud of was the Lewis family reunion. There were over 600 registered relatives that arrived in Spring Bay with activities and meals set up at the Providence Bay Fair Grounds. Her children and grandchildren all settled at their camp for a week. Having her immediate family with her and being immersed in the family at large was a time to remember! Howard and Lenna were close to the McCorriston clan in Sudbury and frequently visited Howard’s family out in Western Canada and Quebec. She lived her faith, sharing God’s love with everyone she met and was always looking for the good in people. Many places were called home. Retirement took them to Arizona for many winters, summers spent at the camp on Manitoulin Island and later in a Waterloo trailer park. Lenna loved arts and crafts and became quite a good painter; using rocks, saw blades, canvas, and fabric mediums, sharing her works of art with friends and relatives. She enjoyed entertaining, line dancing, reading, crocheting, and socializing. Lenna was predeceased by her husband Howard, son Mark, five brothers and two sisters. Survived by two brothers-in-law and five sisters-in-law. Donations in Lenna’s memory may be made to Kitchener East Presbyterian Church or a charity close to Lenna’s heart, Operation Smile. (Cards are available at the funeral home.) Private cremation has taken place. Lenna’s family will hold a burial on Manitoulin Island in the summer of 2022 (more details to be announced). Arrangements entrusted to Henry Walser Funeral Home, 507 Frederick Street, Kitchener, 519-749-8467. Visit www.HenryWalser.com for Lenna’s memorial.