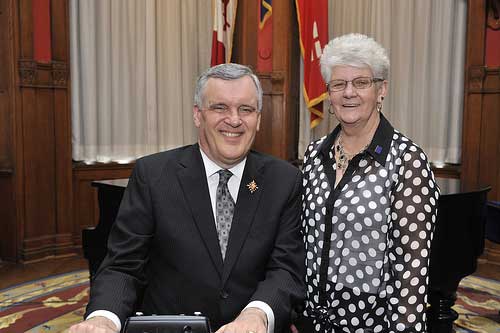 The information you received from the Governor General’s website is in error and I would like your readers to know that I have notified his office asking that a correction be made.

I did not raise funds for the Ladies Auxiliary Charitable Foundation. I did raise funds for the erection of the Youth Memorial and Women’s Memorial on behalf of The Manitoulin District Cenotaph committee, plus a fundraiser in order to have the names of the ships put on the Merchant Marine Memorial.

In my case, the application was made for the Manitoulin Centennial Manor Bed Fund Campaign supported with letters from both Branch 177 and the Ladies’ Auxiliary and five beds were purchased with monies received. Most recently our local hospitals received a total of $13,000 for their fundraising campaign from this charity.

I believe when trying to condense the information received on the application this error was made.

When Mr. Gilchrist called me, he said he had done his home work and felt that the volunteer work I had done for both The Manitoulin District Cenotaph Committee and the Manitoulin Centennial Manor was the reason he felt I deserved this recognition.