SPRING BAY—The annual Decoration Day ceremonies were held this past Sunday at the Manitoulin District Cenotaph to recognize all those Canadian men and women who fought for our freedom with many paying the ultimate sacrifice in World Wars One and Two, the Korean War as well as other conflicts.

After the March-on, led by parade marshal Ron Steeves with Legionnaires, veterans and visiting dignitaries, master of ceremonies Comrade Roy Eaton told the large gathering, “I begin by acknowledging that we gather here today on the traditional territory of the Anishinaabe people: the Ojibwe, the Odawa and the Potawatomi. We acknowledge their stewardship of this land and its surrounding waters which is central to their lives and spirituality. With the Mnidoo Mnising peoples, let us live in respect and gratitude for all creation.”

“We gather today to pay homage to the men and women who served in our country’s forces and those of our allies,” said Mr. Eaton. “Through their courage and sacrifice, these men and women have helped to ensure that we live in freedom and peace, while also fostering the same around the world. The white crosses you see represent the 129 names of Manitoulin veterans who gave their lives in the cause of freedom in the First and Second World Wars and in Korea. We thank you for your presence and for the respect you are giving all veterans.”

The invocation was provided by Reverend Whitney Bruno of Little Current United Church Pastoral Charge, followed by the parade coming to attention and a beautiful rendition of “O Canada” led by the youth student choir from Central Manitoulin Public School (Mindemoya) under the direction of Patti Jo Woods.

Carol Hughes, MP for Algoma-Manitoulin-Kapuskasing, addressed the crowd. “It is great to be here, it has been a couple of years since this ceremony has been held. Comrades, dignitaries and dear friends, it is always an honour for me to participate in your annual Decoration Day as you recognize and honour the brave men and women from Manitoulin Island who served our country in times of war and peace and who lost their lives while serving.”

“Today we pay tribute to them and to those veterans who are still with us today. We remember all that they have done for our country. We also express our deepest appreciation to their family,” said MP Hughes. “We also do this as we keep in our prayers those who are currently serving and honour our veterans for their years of service and dedication to our country.”

“Decoration Day exists to remember all Canadians who served and put their lives on the line to defend our nation and our values,” continued MP Hughes. “And the government has a moral obligation to ensure veterans are cared for once they have completed their service. While many men and women return home to settle into civilian life, some are left to deal with post-traumatic stress disorder and other effects from serving in combat. The fact that a recent auditor general’s report indicating it is taking far too long for (Veterans Affairs Canada) to complete the benefit file for veterans, some as much as 10 months and some even longer, should not be the case. That is who we must continue to advocate, for and with, for the needs of veterans every day, lest we and the government forget our obligation.”

MP Hughes introduced Olha Sotska, of Ukraine, who is one of 41 interns who have been brought from the country to Ottawa to intern for senators and MPs. “She has been a great spokesperson for her country.”

An emotional Ms. Sotska said, “every morning I read about the awful attack on my country. Everyone deserves to be safe, but this has come with a high cost to my country.”

“I am very grateful to those countries in the world, including Canada, who are supporting our country,” said Ms. Sotska. “There are a lot of volunteers who are providing support by fighting side by side with those in my country. I am grateful for the kind words and all the help my country is receiving.”

MP Hughes gave greetings on behalf of MPP Michael Mantha, while Ken Faubert, Legion District H Commander said, “it is a pleasure to attend these ceremonies here today in recognition of all the people that didn’t come home from world conflicts and those that are fighting now for our freedom.”

A minute of silence was held along with the lament and the act of remembrance with the Sudbury and District Pipe Band performing ‘Amazing Grace.’

The CMPS youth choir then led in the singing of ‘God Save the Queen.’ 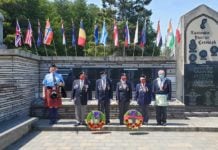