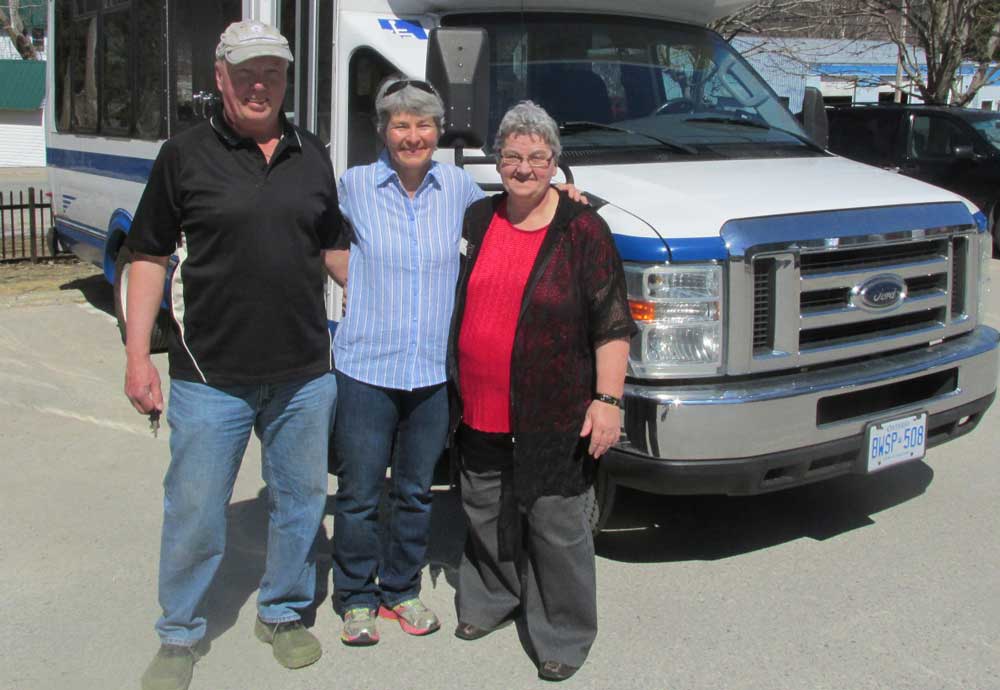 GORE BAY—The Angel Bus is now on site and rolling, having transported residents of the Manitoulin Lodge to an event in Gore Bay on Wednesday. Meanwhile, fundraising committee members indicate that they are inching very close to the fundraising goal of $50,000.

“The Angel Bus is now officially open for business, providing transportation primarily for residents of Manitoulin Lodge, but also for people with accessibility needs on Western Manitoulin, west of an imaginary line through Providence Bay, Mindemoya and Kagawong. There will be no charge for the service, but donations to Gore Bay Manitoulin Lodge Auxiliary Inc., earmarked for the Angel Bus, are always appreciated,” said Sandy Cook, a member of the fundraising committee.

Ms. Cook explained, “Sharon Montgomery has agreed to be our dispatcher, and after she and Dave (her husband) move to Mindemoya in June, we’ll be putting up two billboards with Sharon’s phone number on it. For now, people in need of accessible transportation are asked to phone Sharon at 705-282-8558, and she’ll organize the driver and Angel Bus for your outing.”

“There has been so much love and generosity provided by the community…it has been incredible, it’s like a wedding,” stated Ms. Cook of the community support for the Angel Bus.

The Angel Bus was delivered and on hand at the Lodge last Friday. It is actually a used passenger van in good shape and has loads of room. An automatic lift makes it easy for people who are disabled or in a wheelchair to be transported onto the vehicle.

[quote_left]“We’re anticipating a few bumps in the road as we hone the Angel Bus service and have a brief survey we’re hoping our clients will fill in so we can better serve our seniors,”[/quote_left]

The Angel Bus can handle a maximum of nine passengers, six seated and three in wheelchairs or four and four, said Ms. Cook. “Q-straints donated $2,348.38 of wheelchair tie down product to ensure that up to four wheelchairs will be held stationary throughout the drive,” she explained.”

“The first outing for the Angel Bus will be this Wednesday, April 22 with residents attending the C.C. McLean Public School spring concert rehearsal (in the morning),” said Ms. Cook. She noted the bus is completely outfitted and a safety meeting was held with all drivers to review the Q-straint system and other safety related items on the bus. “Mike Addison was kind enough to donate a fire extinguisher.”

Beacon Images is putting together all the bus advertising, while Gloria Hall of the Lodge said Deb Harper of Frank Cowan Instance did a great job getting insurance for the bus, for the board and general liability.

Ms. Cook noted, “The heartwarming stories that accompany many of the donations are quite incredible, and completely unexpected. We feel very privileged to hear them and they strengthen our resolve to make the Angel Bus a successful, sustainable means of transportation for those in need. Our grand total is now $43,391.13, less than $7,000 to go to reach our goal of $50,000.”

Among some of the recent donations that have been made toward the Angel Bus fundraising campaign, including the donation by Mr. Fogg in memory of his wife Lorna, the former administrator of the Manitoulin Lodge. “The donation is being made in memory of Lorna,” Mr. Fogg told the Recorder. “This (transportation bus) was a cause, a need she had mentioned quite a few times; that the Lodge residents and seniors in the area needed a bus of some kind to be able to travel to activities, events and rides. Lorna always said other agencies had a bus to transport their people, why not the Manitoulin Lodge?”

“We’re anticipating a few bumps in the road as we hone the Angel Bus service and have a brief survey we’re hoping our clients will fill in so we can better serve our seniors,” said Ms. Cook. “We welcome comments and suggestions. The Angel Bus Committee feels strongly that the success and sustainability of the Angel Bus is directly related to how well it serves you. Thank you all so very much for your support.”