SHEGUIANDAH—A changing of the guard took place at the Little Current Fish and Game Club annual general meeting at the Sheguiandah Hall in late March. Both long-time club president Bill Strain and secretary Doug Hore retired, with Lou Shortt taking on the role as president.

“We would like to encourage more members, including younger members, to join,” said Mr. Shortt in his first address to the club following A membership chair report by John Deibel. “This will help keep our club viable and not turn into a senior organization! In our walleye ad in the Expositor, we decided to add, sadly, the club’s wild game dinner will be cancelled until March of 2023, but the club is hoping to keep its hockey pool fundraiser in action.”

“The river watch and permits for walleye capture and release and the hatchery for 2022 have been submitted and approved,” said Mr. Shortt, adding “this will allow the Grade 4 education program to resume at the end of April or first of May when Bass Creek temperatures reach approved levels. We have an ongoing discussion about a tent for this occasion to help with uncooperative weather conditions. Gary Green and Kevin Hutchinson are the leads on this project.”

The club went on to discuss the lack of a boat wash station on Manitoulin Island, particularly “as more and more invasive species are appearing and been transported to our lakes,” he said. “Bill Strain is going to look into signage from the ministry that as a club we could put up at all boat launches. We could also add nearest car washes to the launch for washing boats.” Mr. Shortt suggested that a car wash might be a “possible entrepreneur opportunity” for Little Current.

The club decided to split its Manitoulin Secondary School (MSS) award bursary. “We would like to see two award bursaries of $250 each awarded to two different genders attending a college or university in the applicable field of ecology,” he said. “Also, we would like to encourage students to do some volunteer hours with our members during the hatchery program days.” Mr. Shortt said he would “be visiting MSS to present these ideas to the principals and appropriate staff.”

Mr. Shortt ended his message to the club by noting that “anybody wishing to join the club contact John Diebel at jldiebel58@gmail.com.” 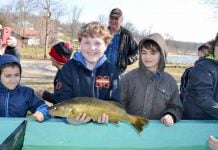