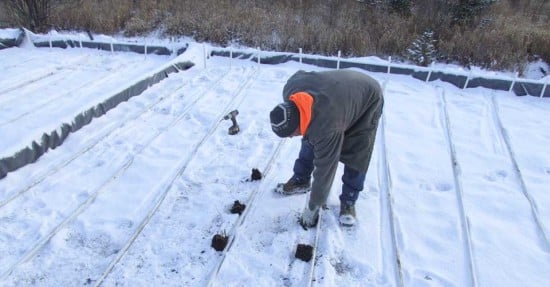 “I like to use bulrushes because they are very resilient,” said Mr. Rozema, president of Aqua Treatment Technologies, a Niagara region water treatment wetlands construction company. “They are able to handle extremes of moisture and drought.”

The system doesn’t always use bulrushes; some systems utilize water lilies and other decorative plants. “Some of the systems we have put in at wineries down in the Niagara region are using more decorative plants, while other places, such as out of the way abattoirs or landfill sites, just let them go wild,” said Mr. Rozema.

The bulrushes are the final touch on the natural lagoon system. The system consists of several gravel and sand-filled cells, with plastic piping and pumps near the top of all but the second last cell (where the water is pumped in through the bottom). The water moves through the aerobic (oxygen enriched) processing cells first and then into the anaerobic (oxygen starved) processing cells. “Each set of microbes that thrives in those environments does a different job,” said Mr. Rozema. “The water filters down on the first set of cells, but on the last set, we pump water in from the bottom so it rises.”

Among the advantages of the natural system are the smaller footprint required by this system which reduces land costs; the technology is reliable and proven and supported by many years of performance monitoring; and it has received government approval for installation and operation at a number of locations.

“In fact, most of our installations are EPA (Environmental Protection Agency) systems, bigger operations that are permitted by the federal government,” he said. “We just recently received approvals for smaller systems in the Niagara region.”

“The engineered systems are well-suited to our needs,” said Birgit Martin, chair of the board of the Manitoulin Island Community Abattoir Inc. “They meet the Ministry of Environment standards better than a traditional field bed and they are very expandable. Should we need to expand the number of kill days at our plant, we can just add more cells onto the system.”

Another advantage of the systems is that they require very little energy to operate the system. Operating costs on a typical system consume as little as 12 to 20 cents of electricity per day. “I did a calculation on one large site, with several thousands of gallons of throughput a day, and the energy cost worked out to less than a couple of thousand dollars a year,” said Mr. Rozema.

There is also no standing water with the natural lagoon system, the absence of which reduces nuisance problems associated with other wetlands such as insects and odour.

“The system usually operates year-round, even in temperate and colder climates with no additional heat input and no decrease in treatment volume or efficiency,” said Mr. Rozema. “This avoids costly storage and trucking and treatment costs associated with many other systems.”

On some systems, there may be a need to add nominal additional heat to keep the microorganisms working at high efficiency, or in the case of landfills, it may make sense to draw down the leachate and store it over a portion of the winter until the weather warms up on its own.

Recent estimates by Northeast Town staff indicate that trucking costs to dispose of the leachate from the town’s landfill site could cost upwards of $2,000 per truckload and would require many truckloads to deal with the issue over the estimated 40 years of operation remaining to the site.

The use of a wetland for waste water treatment sends out a positive message about corporate responsibility and environmental stewardship, a consideration of growing importance to governments and corporations. “It was pretty slow going (in gaining acceptance) for quite a few years, but recently the market has really started to heat up,” said Mr. Rozema.

The company is building a new lagoon system for the commercial Dodge landfill in Espanola and has recently built systems for the Whitefish Lake First Nation.

“We are certainly interested in looking into the process and how it might work for our operations,” said Northeast Town CAO David Williamson. The low costs of ongoing maintenance are particularly attractive to the municipality. “We are always very conscious of ongoing costs,” he said.

Mr. Rozema began his career in natural treatment systems by volunteering with a retired university professor from a US college. “He settled here in Canada and when the US Food and Drug administration sent out requests for research proposals he received funding for several years of research,” said Mr. Rozema. “I was his student assistant.”

Mr. Rozema and his associate travels across both the US and Canada, where they are kept busy installing the natural treatment systems for both governments and private enterprise. One system, installed for the Rainbow District School Board at Valleyview Public School in Sudbury, can process over 23,000 litres per day.

With fingers crossed, the new abattoir should be open for operation very soon. “The filtration system is scheduled to be completed by December 10,” said Ms. Martin. “After that we can apply for our licence.” The only foreseeable variable at this point is the availability of ministry inspectors over the holiday season.

“This has been a long time coming,” said Ms. Martin. “This project officially began in April of 2007, and the board is looking forward to its completion. I think it is going to be very good for the Island.”

The Manitoulin Community Abattoir Inc. annual general meeting is slated for 7:30 pm on Wednesday December 5 and plans are to have the facility on display for an hour prior to the meeting.