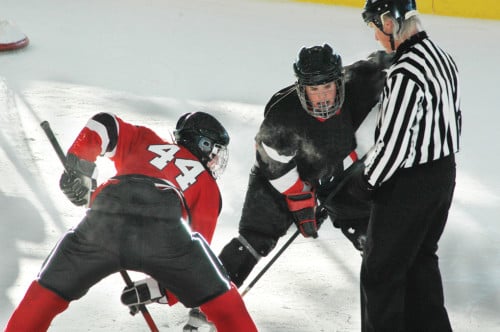 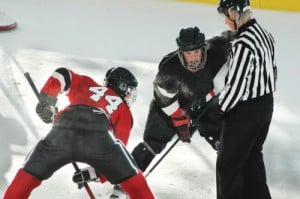 MANITOULIN—Two years ago there were roughly 75 hockey referees associated with the Manitoulin Minor Hockey Association (MMHA). Last year, the number dropped to 58 and this year it fell further, bottoming out at 32.

“Wikwemikong doesn’t have a referee, neither does Manitowaning,” Mr. Thibault told The Expositor. “In fact, Little Current only has two referees. That’s it for east Manitoulin.” He said the rest of the referees are based further west, mostly in Central Manitoulin and Gore Bay.

“This means we have to bring in referees from outside the area to manage our games,” Mr. Thibault explained. “This costs the hockey association anywhere between $120-$150 per game.”

With 34 teams and about 450 players involved in this year’s hockey league, that’s a lot of games on which the association has to shell out extra money, he noted.

In addition to the drop in available referees, there are only six senior referees on the Island this year, Mr. Thibault said. This makes it increasingly difficult as a senior referee is needed to help the junior and new referees learn the role.

Mr. Thibault said there are multiple reasons behind the drop in referees, one being the steep learning curve.

“The referee manual is something like 250 pages thick,” Mr. Thibault said. “There’s game rules, procedures and more involved and new referees have a one-day workshop to learn this.”

To help offset the short workshop length, the senior referees will be shadowing the younger and newer refs until they become comfortable in refereeing and learn how to spot the calls, Mr. Thibault explained.

Even after the new referees no longer need a senior referee shadowing them, “they can also call us and ask us to shadow a game” if they feel it necessary, Mr. Thibault added.

Verbal abuse is the second reason behind a drop in referee numbers, Mr. Thibault said. Abuse comes from the players, the coaches and the staff, he explained.

“Most of the time, the abuse isn’t bad,” Mr. Thibault noted. “It’s something that wouldn’t bother an adult, but a lot of the parents don’t realize the referees donning the stripes are only 14- or 15-years-old.”

There has been a push in the past decade to encourage friendly and courteous playing, but Mr. Thibault acknowledges that during high-intensity play, parents and players alike can get pretty frustrated if a referee makes a call they don’t like or, worse, misses a call completely.

“As an adult, we’ve got thick skin and it won’t bother us,” he said, “but a kid will take it to heart and quit. He doesn’t see why he wants to spend his free time being yelled at.”

For Jamey Van Horn, a Mindemoya teenager, quitting refereeing had little to do with the rules or harassment. It was a combination of multiple factors, including a death in the family.

“My grandfather died right before the refereeing clinic, so that’s why my dad and I aren’t really doing it,” she explained. Darryl, Jamey’s father, was also a referee for many years.

Jamey explained she began refereeing hockey three years ago, when she turned 14. It’s the earliest she could don the black-and-white uniform. An athletic youth, Jamey also plays hockey.

“I just found it really busy with school and all the games,” she explained. “If you’re an athlete, it all conflicts with when they want you to ref.” Jamey also said that being part of the community was difficult, especially when she’d hear so much negativity about referees and the calls they made.

“I think it’s partially because I’m a girl,” she said. “People thought they could question me and make me change my mind. I never refereed high-level hockey so the (comments) weren’t that bad. Coaches would question me, sometimes parents would get angry, but a lot of times I’d hear good things, too.”

Jamey is keeping her options open for refereeing in the future, especially since women referees are in high demand in post-secondary sports.

“I may go back to it in the future,” she said. “It’s a good university job if you can get into it.”

As for the declining number of referees on Manitoulin, Jamey said she thought it could be due to the workloads given to the referees.

The former ref said she felt some of her peers thought it wasn’t worth taking the course if not many games, or shifts, were in their future, as seemed to be the case.

“In my dad’s case, because he’s an older ref and he’s being doing it for a long time, people would always depend on him to make schedules and he got overwhelmed,” she said.

As referee-in-chief, Mr. Thibault said he hopes he can recruit more referees for the league, especially in the eastern part of the Island. He also hopes that some of the measures taken by the league to make life easier for the referees will keep them on board for the long run.

Though it is too late for interested people to master the mysteries of the referee’s whistle for this year, Mr. Thibault said he hopes that people will hear about the need for referees and contact him about the job for next year.

“There’s a yearly qualification that’s necessary to referee and that happened in September,” he said, “but if people are interested, they can contact me for information.”

“So long as everyone remembers why we’re here—the kids—everything will be fine,” Mr. Thibault said.