MANITOULIN––There were some startling changes at Manitoulin Island council tables as the ballots were counted on Monday night. Although four municipalities had their candidates for the top office acclaimed, those mayors and reeves who faced challenges generally went down to defeat.

While nearly all of the votes had been counted and reported by municipal electoral officers by around 11 pm on Monday night, the race in Billings, where the undisputed record holder for municipal office longevity Mayor Austin Hunt was facing off against two challengers, Sandi Hurcomb and David Yurich, lingered on until nearly 2:30 am before reporting the tally.

There will be a number of new faces around the Central Manitoulin council table when the new council is sworn in this December, but the race for mayor was a tight one. Former reeve and challenger Mr. Stephens was ahead of incumbent Mayor Strong at the final count by 16 votes, but Mr. Stephens was not yet declaring himself victor on Monday night.

“It was a really close race,” said Mr. Stephens. “I want to congratulate my opponent on the campaign.” The former mayor was not breaking out the celebration just yet however. “With a 16 vote difference, there is likely to be a recount,” he said.

If the count holds, Mr. Stephens said that he was looking forward to returning to the council table. His two key issues remain the same as he spoke about at the all candidates’ meeting. “I definitely want to take a close look on why our assessments are going up and yet our taxes are going up when there have not been any major changes,” he said. “The other is to look at bringing in assisted living accommodations to the community.”

[polldaddy poll=8406435]
In Ward 1 (Campbell) Patricia MacDonald (214 votes) and Derek Stephens (149 votes) will be returning to the council table, overcoming challenges from Wes Cline (97 votes) and Petra Wall (137 votes).The results of the count on Monday night saw 732 votes for Mr. Stephens and 716 for Mr. Strong.Mr. Stephens also congratulated Mayor Strong and his council on completing a number of projects in the community, particularly finishing work on the bridges in the community and in finding the money to complete the drain project.

“It took a long time for the votes to be calculated,” said Mr. Russell when contacted by The Expositor Monday night. “I just found out about half an hour ago, but I feel pretty good. I’m looking forward to getting to meet the councillors. I’m sure they are all good people and we all have the same goal, to make Tehkummah the best community possible. I’m sure there will be challenges, but we will meet them head on.”

After 35 years in politics (less a three-year hiatus), Gary Brown will be leaving municipal politics with the outcome of this election.

“A lot of people ran their own campaign, and I just went on my past record,” he said. “I don’t think the (Manitou River) bridge project helped much,” he added, referring to the overdue bridge reconstruction project.

“Eric’s (Russell) an honourable man and I hope he does his best for this municipality,” Mr. Brown said.

“After 35 years I have a new lease on life,” he continued. “Next year I’ll be 60 and I’ve given up the best years of my life for this job. No one likes to lose but I can bow out gracefully as I’ve accomplished a lot of projects over my years.”

“I wish them the best,” Mr. Brown concluded.

It was a tight race in Gordon/Barrie Island with Lee Hayden’s votes for reeve totaling 221 earning him the seat at the head of council over opponent Barbara Barfoot who garnered 141 votes. Mr. Hayden’s council will include Ted Culgin (275 votes), Bill Baker (270 votes), incumbent Betty Noble (244 votes) and Perry Patterson (267). Defeated were candidates Sea Marsland (41) and Adrianne Merrylees (155).

“I’m feeling elated,” said Mr. Hayden. “I’m really looking forward to leading the next council. I congratulate my opponent on her campaign and her efforts. I think we have a great group of councillors and I look forward to the next four years. Three of the council members are new so we will be spending some time come December getting everyone up to speed, but I look forward to this council’s fresh ideas. My main objective will be transparency for my term in office.”

In Cockburn Island, one of the oldest incorporated municipalities in Northern Ontario, voters elected two new faces to its council table, Robert Brown (77) and Glen Cressman (79), choosing to keep Evan Papineau (54) and Don Rogers (89) as elected officials for this term. Brenda Jones was acclaimed as mayor of Cockburn Island. Jason Stewart received 15 votes while incumbent Scott Stewart had 50 votes.

In Assiginack Township, voters, like the Northeast Town, chose to go the familiar route and voted for incumbents Bob Case (385), Leslie Fields (458) and Brenda Reid (362). Rounding out the council table is Hugh Moggy (476), who has served in the capacity of reeve or councillor for Assiginack in the past for 34 years, losing his seat in the last election but gaining it back on Monday. Paul Moffat, who sat as a councillor during the last term, was acclaimed as reeve last month. Fionn Closs came in with 279 votes while Cole Bowerman, Assiginack’s youngest candidate, received 231 votes.

In the Township of Burpee-Mills, incumbent Ken Noland was acclaimed as reeve, as was the rest of his council. Incumbent councillors Wayne Bailey, Lyle Honess and Pentti Palonen will all sit for the next term, joined by newcomer Art Hayden.

Gore Bay did not have an election for council either as incumbent Ron Lane was acclaimed as mayor along with incumbent councillors Yvonne Bailey, Jack Clark and Ken Blodgett who will be joined by new councillors Larry Eirikson, Dan Osborne and Kevin Woestenenk

In the race for Manitoulin Island trustee on the Rainbow District School Board, veteran and incumbent trustee Larry Killens was handily reelected with 2,722 votes while first-time challenger Maureen Egan polled 2,199 votes. 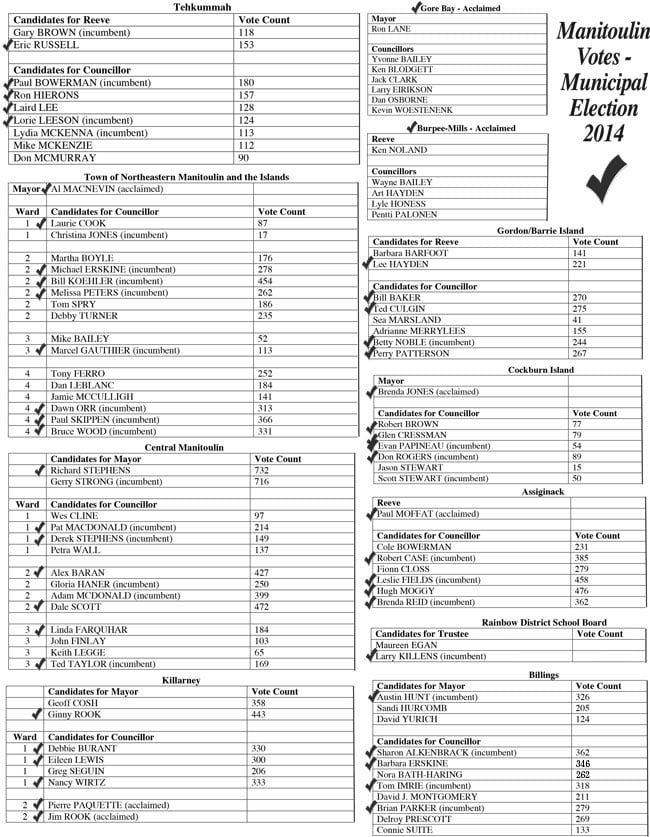