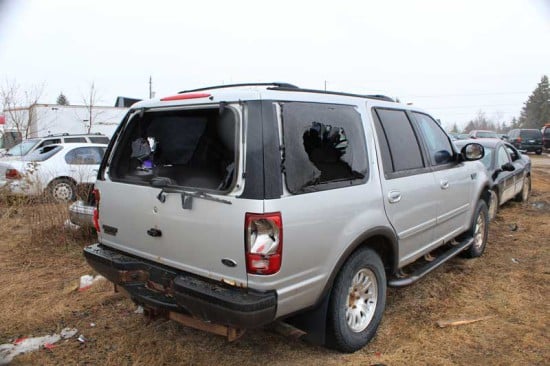 LITTLE CURRENT–On Thursday, April 4 at 7:55 am, Manitoulin OPP received a report of damage to a number of vehicles located at Highway 6 Service Centre on Manitowaning Road in Little Current.

OPP arrived on scene and through their investigation discovered 10 vehicles parked in the rear of the service centre severely damaged. It appears that sometime over night the culprit(s) used rocks, bricks, as well as a steel pole to inflict the damage. Damage resulted in windows being smashed and the body of the vehicles being dented and scratched. Some of the vehicles were for scrap parts, however others were customer vehicles left for repair. An adjacent residential property also had its wood plank fence damaged. The estimated cost of this vandalism is in the thousands of dollars.

Police are continuing the investigation and believe the crime occurred during the evening of Wednesday, April 3. Police are asking the public if they have any knowledge of this crime or saw anything suspicious to call police or you can call Crime Stoppers at 1-800-222-TIPS (8477). If your tip leads to an arrest, you may be eligible for a cash reward. You will never have to give your name or testify in court and Crime Stoppers doesn’t have call display.