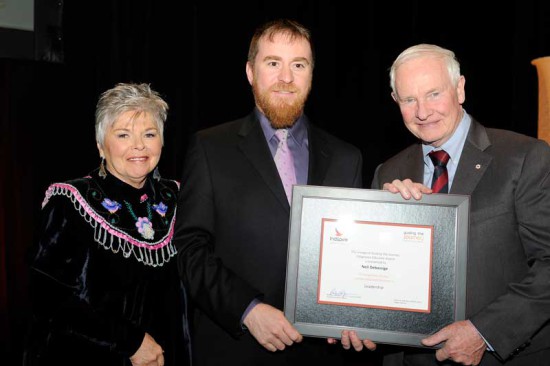 M’CHIGEENG– Neil Debassige, principal of Lakeview School in M’Chigeeng, has been recognized with a Guiding the Journey: Indigenous Educator National Award by Indspire.

“It is quite an honour to have won this award,” Mr. Debassige told the Recorder late last week. The award had been presented by Indspire Patron his Excellency the Right Honourable David Johnstone, Governor General of Canada, at the inaugural awards at the National Gathering for Indigenous Education in Calgary on March 18.

“It was a big deal with the Governor General David Johnston giving out the awards,” said Mr. Debassige. “They flew us out there, my wife and our two daughters and my dad.”

“It is an honour to have received the award, but ultimately it is the team we have here at Lakeview that I accepted the award on behalf of, on behalf of the school and the community.”

“What Indspire is advocating is aboriginal learning, and these awards were presented at the first annual education conference,” said Mr. Debassige. “They presented a number of national awards, with recipients having been nominated.”

Mr. Debassige is one of 12 educators from across Canada honoured for their work. Roberta L. Jamieson said, “the contributions of all of the award recipients honoured here can be an inspiration to all Canadians. These are people who day in, day out are there for our students, helping them realize their potential.”

In recognizing Mr. Debassige, the award citation noted: “Neil Debassige’s approach to leadership in his role as principal of Lakeview School on Manitoulin Island is rooted deep within Ojibwe culture. During the school day, he shares knowledge about cultural traditions like the Seven Grandfather teachings. In learning and teaching partnership between Lakeview teachers and Laurentian University education students, Mr. Debassige shares his vision for Indigenous education.”

“Every year, fifth year Laurentian students spend a day at Lakeview. Mr. Debassige conducts sessions in which he explores important ideas, including balance and the Medicine Wheel teachings with the candidate educators. He invites M’Chigeeng community members and Lakeview teachers to present Indigenous education teaching and learning components. It’s all part of Mr. Debassige’s commitment to strengthen cultural bonds and share Indigenous knowledge.”

As a mentor for teacher candidates who have their practicum placement at Lakeview School, Mr. Debassige guides and supports three to seven candidates each year. By being a partner with non-Indigenous teachers, learners and leaders, he creates respect and appreciation for Indigenous knowledge, culture and languages.

Mr. Debasssige received Laurentian’s Aboriginal Educator Award for the partnership work between Laurentian’s School of Education and Lakeview School. His effective speaking engagements and presentations in the Northern Ontario School of Medicine and at Laurentian University were also recognized.

Mr. Debassige was principal of Wasse Abin High School in Wikwemikong and at Francine Wesley Secondary School in Kashechewan. He taught school for five years, from 1995 to 2000.”

“I think the nomination for the award came from Laurentian University,” said Mr. Debassige. “We have a partnership with them in the teacher education program, and I’ve done talks with their medical school and the education department of the school itself. As part of the retention and recruitment we take on teacher candidate every year, as part of their preparation to becoming teachers, creating support here for candidates over five to six weeks.”