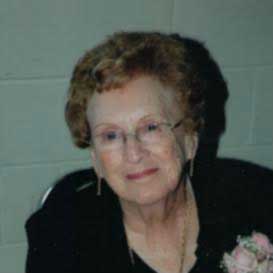 In loving memory of Mrs. Merle Francis Solomon (nee Oakes), 94 years, who passed away at Pioneer Manor Cedar Place on Thursday, January 19, 2017. Merle was born in Providence Bay, ON on April 11, 1922 to the late Albert and Martha (nee Sloan) Oakes. Beloved wife of the late Ferdinand Solomon who passed away in 1979. Loving mother of James (Carolyn) of Garson, Edward (Dianne) of Kingston, Leonard (Marie) of Kitchener, Gregory (Laurie) of Millbrook and the late Terry, Gerard and Cheryl. Cherished grandmother of 10 and great-grandmother of eight. Merle is also predeceased by her grandson Kevin Solomon who passed away in 1997. Predeceased by all her nine siblings, Laura (George) Warren, 1971; Alex Oakes, 1974; Robert (Grace) Oakes, 1968; Hazel (Len) Ferguson, 1974; Thomas Oakes, 1907; Doran Oakes, 1979; Tena (Ted) Pitfield, 1990; Mary (Harvey) Cress, 1995; and Grant (Nelda) Oakes, 2010. Merle and Ferdinand married August 2, 1941 in Parry Sound, ON. Merle moved to Mulgrave, NS to be closer to Ferdy who was in the Navy on a Mine Sweeper Esquimalt. Merle and Ferdy moved with family to Gatchel, ON then on to Badgley Island where Ferdy worked as a Lighthouse Keeper. Their son Terry drowned there and they decided to move to Killarney, ON in 1950. Merle’s family were so thankful she had so many friends in Killarney that looked out for her when in need of help. She loved to socialize, dance and play cards. Thank you to Dr. Bill McMullen and the nursing staff over the years at the Killarney Health Centre for all the care and kindness, as well as Dr. St. Martin and the nursing staff at Pioneer Manor’s Cedar Place. Thank you as well to Killarney CWL that Merle was so proud to be a part of. As per Merle’s wishes there will be no visitation. A Memorial Mass will take place on Tuesday, April 25, 2017 at 11 am at St. Bonaventure Church followed by interment in the family plot in Killarney. In lieu of flowers, donations to St. Bonaventure Church or Killarney Health Centre in Merle’s honour would be appreciated. Arrangements entrusted to Ranger’s Cremation and Burial Services Ltd. Online condolences can be posted at www.RangersSudbury.com.