OTTAWA—Groups trying to preserve Canada’s historically significant lighthouses are finding that money is the biggest challenge, according to Carol Hughes.

The MP for Algoma-Manitoulin-Kapuskasing told the House of Commons about difficulties that groups like the LaCloche Manitoulin Lighthouse Association (LMLA) are encountering as they work quickly to preserve lighthouses designated surplus by the government.

“For groups like the LaCloche Manitoulin Lighthouse Association, who are trying to preserve our heritage lighthouses, the reality that most of these properties are fixer-uppers is coming into sharp focus,” said Ms. Hughes. “In fact, money is turning into a major stumbling block and now these properties could be destined for the scrapheap of Canadian history.”

Ms. Hughes explained how the Mississagi Lighthouse alone requires half a million dollars in upgrades, including $80,000 in emergency repairs just so the building can survive the next six months. She also explained that the problem was by no means local, and that even the iconic lighthouse in Peggy’s Cove, Nova Scotia, is facing financial burdens and could end up demolished despite hosting half a million tourists a year.

The government is now making decisions on the petitions and applications it has received for the surplus lighthouses. Ms. Hughes contends that there will be more government money needed if the preservation of these historical sites is a priority for Canada.

“Without a cash infusion, no commitment to these heritage symbols is complete,” concluded Ms. Hughes. “Surely, it is time for the government to make funds available to clean up sites and do basic repairs before handing over our national treasures.” 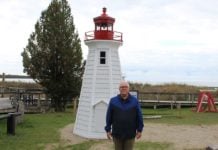