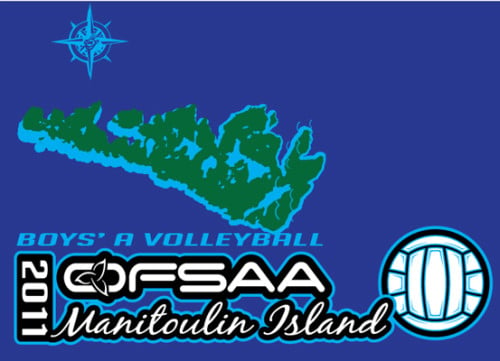 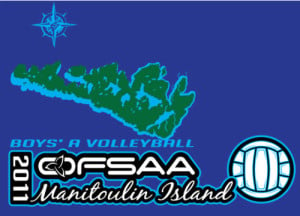 by Stacey Lavallie
M’CHIGEENG—Peter Kategiannis, volleyball coach and teacher at Manitoulin Secondary School (MSS), is the convenor of this year’s ‘A’ division Ontario Federation of Athletic Associations (OFSAA) volleyball tournament, which takes place this Thursday to Saturday (November 24-26) at MSS, Wasse Abin High School in Wikwemikong and at Espanola High School.
This is the second time the high school is hosting an OFSAA volleyball tournament, with the last held in 2004.
“We had great feedback from everyone about our last OFSAA event,” Mr. Kategiannis told The Expositor. “It helped us on our bid for this year.”
For people who really love volleyball, the weekend tournament will be a delight, Mr. Kategiannis said.
“Since this is the provincial tournament, you have the best teams in Ontario here,” he said. “It’ll be some great volleyball action.”
One of the reasons Mr. Kategiannis said the school put in a bid for this year’s OFSAA tournament is because the senior boys’ volleyball team is the “strongest it’s been in years.”
“A lot of the boys took this year off hockey and other sports,” Mr. Kategiannis explained. “They wanted to put all their effort into volleyball.” In an earlier interview, Mr. Kategiannis said that in his years of coaching, this team is “probably the best team I’ve ever had.”
By hosting OFSAA at MSS this year, the Mustangs have a chance to bring home a medal in front of a hometown crowd.
With OFSAA excitement building, stress for Mr. Kategiannis and his team of volunteers is also building. It takes a lot of time and effort to host a tournament the size of OFSAA.
“When we first did this in 2004, larger cities were telling us we couldn’t do it,” Mr. Kategianis recalled. “Where would we put everyone?”
As host, it falls to MSS to book lodging for each of the teams, the coaches and refereeing staff. Referees are coming in from all over the province to help bolster the limited refereeing staff on the Island, Mr. Kategiannis said.
While the school was able to pull off lodging easily enough the first time, this time around OFSAA landed smack-dab in the middle of hunting season. In addition to hunters, lodgings are also being taken up by highway and bridge repair workers who are working in the area.
“We have people lodged all over the Island and in Espanola,” Mr. Kategiannis said, a bit ruefully. “We had hoped to book a few lodges, but the hunters got them first.”
It costs roughly $16,000 to host a tournament, according to Mr. Kategiannis. The school has raised most of the money through local business advertising, but it still has a bit of a way to go. Mr. Kategiannis said he is hopeful the entrance fees—$2 a game or $5 for the entire tournament—will help recoup the rest.
“We also have a banquet for the participating teams,” Mr. Kategiannis said, adding that it is a requirement under OFSAA bylaws. Again, timing cost MSS the venue it had hosted the banquet in the previous tournament.
“Four more teams means 20 more matches,” Mr. Kategiannis said regarding the number of teams participating in the tournament. “This means we had to have the banquet on Wednesday instead of Thursday and the hall we used last time is being used for something else.”
The banquet will be held in the MSS cafeteria instead, a bit of a tight fit, Mr. Kategiannis admitted.
Finally, as convenor, Mr. Kategiannis has to secure places for the teams to practice. Since the high school gymnasiums will be set up and in use with actual tournament play, he’s hoping the public schools will get on board to help out.
Despite the challenges that go into hosting OFSAA, Mr. Kategiannis said he’s excited about the tournament.
“It’s going to be the best volleyball in the province,” he said, a grin on his face. “The students are hyped, the school is hyped. We’re excited.”