M’CHIGEENG—It is never easy for any team to follow up a championship season with a strong campaign the following year. Thus far this season, however, the Manitoulin Secondary School (MSS) Mustangs girls’ hockey team are going against the grain by opening the season with two straight wins.

After winning their opening game of the season against Lively 12-2, the Mustangs played Marymount on Wednesday, November 14, winning by a 7-0 score. The Mustangs scoring three goals early in the first period and cruised the rest of the game.

“It was actually a disappointing game to me,” said Mustangs Coach Mike Meeker. “That is a good team we played and I was expecting a really good game from them; in the east west (pre-season game) we had tied 0-0,” said Mr. Meeker. “In this game they lost their regular goalie after a few minutes of play; she had dislocated her shoulder and had to be taken by ambulance to the hospital.”

“We have one of the strongest teams we’ve had in at least 10 years,” stated Mr. Meeker. We have six solid defencemen who we can put any set of combination of two together in any situation and they will play well. Four of our players are rookies, but they aren’t playing like rookies. We have three dangerous forward lines that can and have all scored. We are scoring more than we did all last year and our goalie, Sophie Bondi, is one of the best goalies in the league.”

“It looks as if it’s going to be a fun year,” said Mr. Meeker. “Last year we were nowhere near where we are at this time of the season and won the division two championship against Bishop Carter. But it’s a long season and anything can happen.” 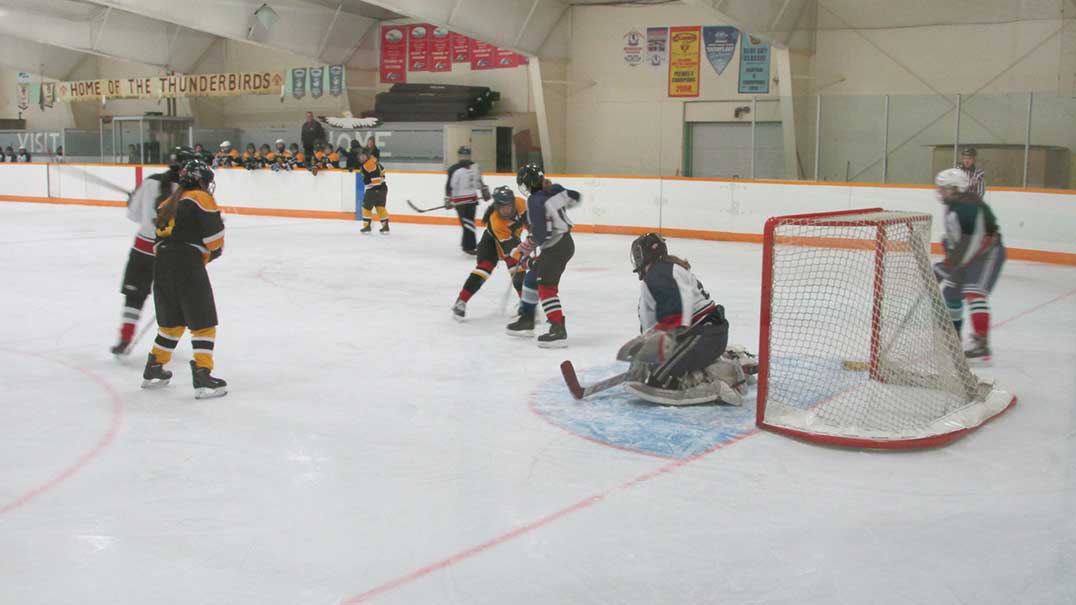 Mr. Meeker said the word he is continually using to tell his charges how he wants them to play, “is to be tenacious. We want to play tenacious at both ends of the ice at all time.”

Meanwhile, the MSS boys’ team record stands at one and two.

The MSS Mustangs boys’ hockey team bounced back from a regular season opening game home loss, to win their first regular season road game on Monday of last week versus Lockerby. However, in their third game of the regular season, the Mustangs dropped a game to St. Benedict’s.

“We split the first two games,” Jordan Smith, assistant coach of the Mustangs told The Recorder after the teams second game of the season. “We lost last Friday (in a game played in Little Current) to Bishop Carter. We played a good game and it was fairly close. We were down 3-2 heading into the third period, but we had a little bit of a let down and lost 6-3.”

“We played a nice team game and are starting to work together and do the little things properly,” said Mr. Smith.

On Wednesday, November 14, MSS was shut-out in a close 2-0 game against St. Benedict’s.