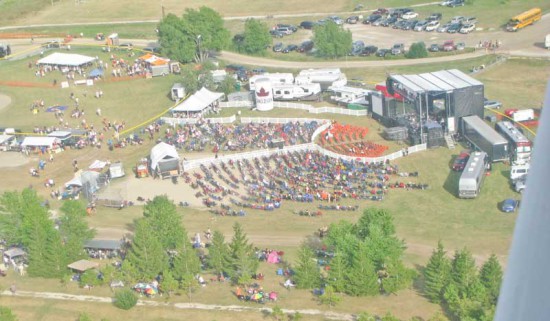 LITTLE CURRENT—It’s not yet clear how many events will be allowed at the Manitoulin Country Fest venue, adjacent to the town of Little Current, this year or what the nature of these events will be.

Although Manitoulin Country Fest organizers Craig and Kelly Timmermans attended a public meeting held to consider a bylaw amendment on this issue last week, Northeast Town CAO Dave Williamson was firm that council could not make any decision on the bylaw until the Manitoulin Planning Board had offered its opinion and also not until Manitoulin Country Fest’s request for change becomes more specific.

“The wording of the bylaw amendment would grant the property owner unlimited events,” stated Mr. Williamson at the public meeting in response to a question by Councillor Bill Koehler if the proposed amendment would create an open door policy on the property and what town staff felt of the proposed changes. “They would, however, be required to get a licence from the town for events exceeding 500 people.”

Mr. Williamson added that from a staff perspective, the amendment was too broad and suggested that the applicants make the amendments more specific.

The public meeting began with Northeast Town Mayor Al MacNevin declaring a conflict of interest and handing the meeting over to deputy mayor Marcel Gauthier, due to one of the submissions regarding the application coming from his wife.

Town clerk Pam Cress read letters submitted from property owners within a 120-metre area of the property in question.

The first was from William and Nancy Hance who asked a number of questions such as, “Have the Timmermans fulfilled their previous commitments to the Northeast Town? Will RVs, tents and guests be allowed to stay on site for events and will this create permanent camp site? Will provincial regulations for RV campsites be enforced and will each event be approved by the Northeast Town council on a yearly basis?”

The Hances also stated in their letter that “unlike Manitoulin Country Fest, it does not appear the other proposed event will be economically beneficial to the town,” and closed their letter by stating, “we have concerns about the credibility of the Timmermans.”

The second letter submitted was from Charlene MacNevin. She began her letter by stating that “as a permanent resident on Channelview Road, I am opposed to this expansion.”

She expressed that she felt the “very essence of living out of town” would be threatened. She also claimed that the Timmermans reassured nearby landowners at a past meeting that the “aspect of a drive-in theatre would not be pursued as the neighbours present were against such a development.”

The final submission was from Randy Noble that simply stated “as the owner of Randy Noble Trucking, immediately adjacent to the east-side of the property, I am in support of their proposed zoning amendment and wish them well in their endeavours.”

After the letters were read, Mr. and Ms. Timmermans were given the opportunity of addressing the concerns expressed in the letters and the reasons for the application for the proposed bylaw amendments.

“In the past we were granted permission to hold three major events, however we thought it was important to address the vagueness of this,” stated Ms. Timmermans, adding that last year there had been some confusion over what classified as a event, as they had received a notice from the bylaw officer after holding drive-in movie events.

Ms. Timmermans addressed the issue brought forward in Ms. McNevin’s letter concerning the drive in-movie events and the comment made at a past meeting to residents stating they would not hold events of that nature on the property.

“In 2011 we met with area residents, and at that time the concern from residents with hosting drive in-movies was the traffic and noise, so we agreed to no drive-ins at that time,” explained Ms. Timmermans, “but since then we have added a second driveway, built a permanent amphitheatre and have berms in place to help with noise.”

“We want to have defined what a major music event is and we want to be allowed to hold smaller events as well,” continued Ms. Timmermans. “We understand there are concerns, but the other thing to note is that it is a commercial area.”

Members of the public were also given a change to ask questions, such as Ruth Ann Bastert, who inquired as to the type and length of the other proposed events.

Ms. Timmermans responded that single day events would be things such as weddings or community events such as an event for BridgeFest that would run from the afternoon into the evening, but noise bylaws would control the volume allowed and until what time.

Council discussed the bylaw amendment that states the proposed changes would permit by special provision, “annually, a maximum of three major outdoor festival like music related events (deemed to mean an outdoor musical festival having a daily attendance greater than 1,500 people and taking place over more than one consecutive day, including Manitoulin Country Fest)” and “other outdoor single day events, such as concerts and stage performances, weddings, anniversary parties and other similar celebrations” and “an outdoor movie theatre in the existing amphitheater and all such events to include ancillary and/or accessory uses to support such uses and activities including but not limited to beer gardens, camping and vendors.”

Ms. Timmermans concluded the meeting by telling council, “we are not trying to pull the wool over anyone’s eyes. We are willing to cover off anything you want and work with the wording. Our intention is just to bring people to the Island.”

The Timmermans also asked council to add the proposed bylaw amendment to council’s agenda in the near future, once a recommendation from the planning board had been made so that they could get started on planning and promoting events.