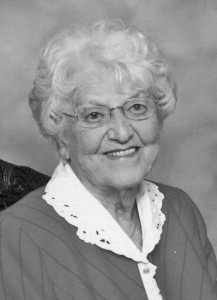 The family is saddened to announce the unexpected, but peaceful death of Nellie, surrounded by love, on a sunny November afternoon, just three weeks short of her 96th birthday. Wife of the late Lawrence Thompson (2004). Mother of Carl (Donna) Thompson, Valerie (the late Larry 2006) Moore, and Maxine (Pete) Byerlay. Grandma to Lee (Nicole Beifuss) Byerlay, Nicole (Joe) Pinto, Jason (Michelle) Thompson, and Heidi (Brad) Rice. Great-grandma to Brady Rice, Jacob Thompson and Emrys Beifuss-Byerlay. Nellie, the youngest of seven including a sister and five brothers who predeceased her, was born on Barrie Island, Manitoulin and was a proud “Haweater”. As Matriarch of the family for 18 years, Nellie, with her lucid memory to the end, was the “go-to” information source for family history and anecdotes. On her 89th birthday she told the family she would like to have a computer. Using the “hunt-and-peck” technique, she exchanged e-mail with family and friends around the world. She also mastered “Skype”, communicating with her daughter, Val, in BC, each day. As well, she had a multitude of friends on “Facebook”. Moving to Simcoe from Manitoulin, she married Lawrence Thompson, just four days before the outbreak of WW2 in 1939. During Lawrence’s five years overseas with the army, Nellie raised her son, Carl while working at the American Can Co. in Simcoe. She played piano in a band called the “Canco Mountaineers”. After the war they built and operated Thompson’s Service Station, Lunch Room and Car Sales on Queensway West, Simcoe. Val and Max were born just prior to the opening of this new venture. Nellie’s homemade pies and 15-cent hamburgers became legendary. In 1970 they retired to Courtland and formed “La-Nella”, a cottage industry making gold-wire jewellery. As part of this new hobby, they spent many enjoyable years “rock-hounding” throughout North America and were active members of the Brantford Lapidary Club. In 1997 Lawrence and Nellie moved from Tillsonburg to Brantford to begin a new phase of their life. Another of her interests was her garden and particularly her roses. Most recently Nellie was the Number One fan of her granddaughter Nikki’s slow pitch ball teams where she was affectionately know as “Grandma Nellie”. A celebration of Nellie’s life will take place on Sunday, November 25, 2012 from 2 pm to 4 pm in Fairview United Church Hall, 49 Wayne Drive, Brantford. We invite all of her family and friends to join us. Cremation has taken place. Arrangements entrusted to Verhoeve Funeral Homes Limited, Tillsonburg, 519-842-4238. Interment for both Nellie and Lawrence will be in Simcoe at a later date. In lieu of flowers, donations to her favourite charity, Camp Trillium, Rainbow Lake at Waterford would be appreciated. Favourite Memories and Personal Condolences at www.verhoevefuneralhomes.com.