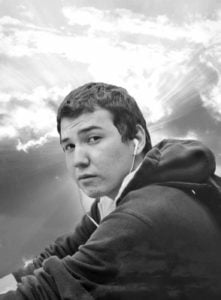 In loving memory of Nicholas “Nick” Charlie Wilfred Wemigwans who started his journey to the Spirit World on his 21st birthday – August 5, 2016. Nick was a student of the Wikwemikong High School where he was a member of the Robotics Team 5672 as the Lead Programmer. He had a passion for working with any technology gadgets and knowledge of interesting facts. He took it upon himself to learn our native language. This led him to enjoy his first summer job working with the WHO. He took interest in learning different languages, like Japanese and Chinese. He had talent with his pencilled sketches and computer drawings to great detail. Nicholas made delicious homemade banana bread from scratch and would bring some to his grandparents who enjoyed his company and short visits. He loved being around family and being a part of get-togethers eating great meals especially his favourite foods; dill pickle chips, Dr. Pepper, macaroni soup, scone and turkey dinners. He was quick with his funny remarks and could make a whole room of cousins laugh with two words. It was hard to get a smile out of him, but when you did and if it came with a laugh we all knew that was big. He will always be remembered for his humility and helping hand; he dropped whatever he was doing no questions asked. He always said, “There’s a logical explanation for everything.” His family came together to realize his greatest lesson was to be humble and love one another. He will be missed dearly by his mother Myrna Wemigwans (partner Calvin Shawanda), sister Olivia “Olee” (Matt), and his younger brothers Peter and Tristan. One of his proudest moments was to meet his niece Baby Lydia Sunrise. Forever cherished by grandparents Gordon and Julie Wemigwans. Also, will be missed by special Step-Dad Wayne “Zeemo” Pitawanakwat, and aunties Juliette, Mona (Irvin), Starr, Amanda (Leon), Robin (Will), and Deanna (predeceased). Forever in the hearts of his cousins; Autumn-Lee, Cody, Lawrence, Virginia, Esther, Lee Ann, Michael, Mathew, Marlon, Brandon, Austin, Julia, Lisa, Summer, Becky, Annie, Liza, Wii’um, M’komi, Carlos, Gordon, and little cousins (Emalee, Liam, Justice, and Cedar). He is reunited with his beloved dog “Jenny-Boy”. Visitation was held at the Rabbit Island Centre starting on Tuesday, August 9, 2016 at 8 pm. Celebration of Life Service was on Thursday, August 11, 2016 at 11 am. Potluck Feast was held at 81 Henry Street (Gramma’s House). Record your thoughts, memories and photos at www.islandfuneralhome.ca.