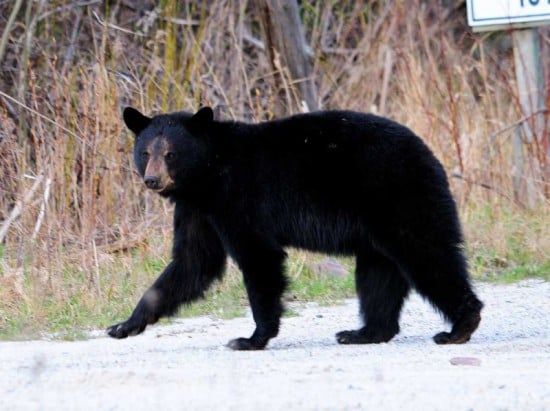 BIDWELL­­––Islanders tend to be irresistibly drawn back to the blessed shores of Manitoulin, but for one ursine expatriate this past summer, following that urge to return proved fatal.

Paula Fields was staying at a camp near Wee Point on Lake Manitou this past summer when she heard a commotion out on the porch. With a room full of children behind her, Ms. Fields pulled up the blind, expecting to see a raccoon outside. Instead she found herself nose to nose with a 250-pound black bear. The situation was made even more stressful when she called her father and he could not find the cell phone so he gave up and went to bed.

“It was the most terrifying experience of my life,” she said. “When I could not reach my father I gathered all the children into one room in the camp and we huddled there until the sun came up.”

Ms. Fields had been sleeping with earplugs when she was awoken by a loud bang. “I had the curtains drawn closed to keep out the light, but it was a hot night, and the window is one of those big windows that slide up and down. I had the window all the way up,” she said. “The bear had knocked over the barbecue and was climbing on top of it.”

That incident, along with a few others, set in motion a chain of events that would end with Manitowaning’s Graham Lloyd (Ms. Fields’ father) shooting the nuisance bear.

Following Ms. Fields and her children’s close encounter with the bear, the family contacted the Ministry of Natural Resources to try and have the bear removed. “They said they don’t send anyone anymore and to contact the OPP,” said Mr. Lloyd. “The police told us that if it was a nuisance, to shoot it. They don’t have the resources to send anyone out either.”

“I followed all the instructions on the Bearwise program,” she said. “I took PineSol and wiped all of the doorknobs that the kids might have touched with their sticky fingers. I went around and poured it all over where they might have spilled food and all over the grass where we had a fish fry.”

She carefully instructed her children on the need to back away slowly from the bear, never run, but there was a catch to that. “I have a five-year-old,” she said. “I asked them what to do about her? They said ‘give her a whistle and have her blow that if she sees a bear’.”

The bear could have survived its close encounter with humans, but for its natural instincts to follow a route that has proven to be productive for food.

“We had found some bear poop in the area,” said Les Fields. “Paula, Bill and the kids, Graham and Leila (Lloyd) were at the camp. Bob and Tracy (Fields, Bob is her middle son) were there and Bob pointed out there was bear poop on the lawn.” The family was vigilant, but since bear scat is not that unusual, they were not too concerned, assuming the bear would steer clear with people in the neighbourhood. The very next night they made a discovery that was to prove that assumption wrong.

There had been some oil in a fryer used to cook that day’s catch of fish. “The oil was too hot to take out of the fryer,” said Les Fields. “I guess it was left to cool overnight, and the bear tipped the stove over and drank up the oil. Things got a little bit loose after that, we leave it at that.”

Bears tend to follow a route where they have previously found food, and that route took the bear near to where the family camp was located.

“The real victim in all of this was the bear,” said Les Fields, whose grandchildren were in the cabin at the time of the alarming visit the bear made to the family cottage. “Still, it could have been very serious, all the bear had to do was push on the screen and it would have been in.”

A few days later, a neighbour called down to the family to let them know that the bear had been seen near their place and that it was likely headed in the direction of the family’s camp. “McFarlane (the neighbour) called down to say the bear is on its way,” said Mr. Lloyd.

“That was what really topped it off,” said Ms. Fields. “When the neighbour called to tell me the bear was on its way down and I had five of my 15-year-old’s teenage friends playing freeze tag in the yard and my mom was out walking her little dog.”

“I packed up my things and my kids and set out for home until the bear was gone,” she said.

Mr. Lloyd and his wife were sleeping in their camper keenly aware that the bear was likely in the area. Ms. Lloyd, whose hearing is quite acute these days thanks to a successful cochlear implant operation, woke her husband up three times during that night. The first time she shook him awake there was no indication of what she might have heard, the second time Mr. Lloyd went to investigate the late night percussionist turned out to be a raccoon, but with the third time proved to be a charm. “The bear was up looking in the window,” recalled Les Fields. He had knocked over some things that made the noise.”

“He had no fear,” said Les Fields. “He had already established a route and he travelled around it once every one or two days.”

A few moments later, Mr. Lloyd, who is a seasoned hunter, had lined up his shot and dispatched the animal. The bear was buried by backhoe a short time later, but the biggest shock came when Les Fields called the number on a tag found on the bear.

The bear had been tranquilized the previous summer, barely a quarter mile from where it was shot.

“We thought that maybe it had been captured somewhere further up North,” she said. But that was not the case. “The MNR had taken the bear and released it at a location up off the 144 (Highway), near Cartier by Halfway Lake Provincial Park,” recalled Les Fields.

The MNR told her that it was not at all unusual for bears to travel many hundreds of kilometres to return to their home territory.

“The bear fellow from the MNR was telling me about a mother with three cubs they had captured near Killarney in 2011,” said Les. Fields. “It was only eight days later she was there with all three cubs. They have an amazing homing instinct, an ability to travel very long distances unerringly.”

Another surprising thing Les Fields learned in her conversation with MNR bear expert Blake Morgan was that people should not eat bear meat from any animal that had been tranquilized within a year of being shot.

“This story really emphasizes why it is so important for people to make sure there is no food source around,” said Les Fields. “That includes any garbage the bears can get at. We have to make sure that our summer visitors are aware of how important that is. Some people, especially people from a more urban area, might think it is cute to feed a bear so they can watch them eat. But once a bear finds a place where there is likely to be food, they will keep coming back time and again to that place. Once bears have become accustomed to people and lose their fear, it is only a matter of time before someone gets hurt, and it is almost always the bear.”

The loss of the MNR relocation program is a concern, but even with the program in place, bears can find their way back to a food source.

One thing is for certain. “My dad is my hero,” said Ms. Fields of Mr. Lloyd. “He’s the greatest!” 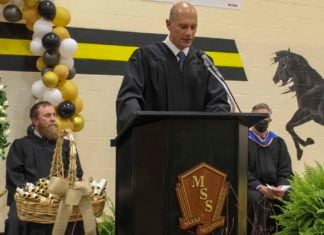