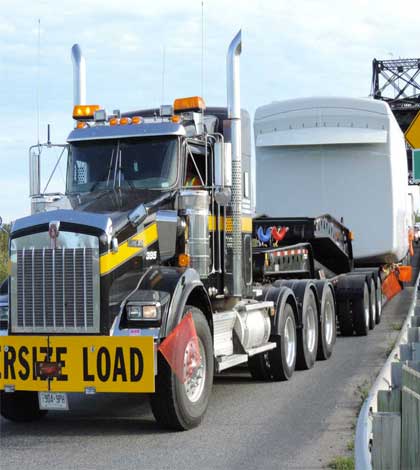 LITTLE CURRENT—The various components of the McLean’s Mountain Wind Farm project, a joint project between Mnidoo Mnising Power General Partnership Inc. and Northland Power Inc., have begun to arrive on Manitoulin, with the turbine construction to begin next week.

Mr. Stret explained that each TBR had to be turned to a 45 degree angle on the flat bed truck delivering it prior to crossing the swing bridge and then laid flat again on the other side of bridge in Little Current.

“The other turbine components have begun to arrive as well,” continued Mr. Stret. “The components for T9 will arrive first and we will be assembling the towers one by one from northwest to southeast.”

On Monday morning, the T9 nacelle (the top element that houses the gear box and generator) arrived, along with its tower sections. The rest of the tower will be arriving later this week, along with the blades next week.

“All the components arrive via train to Sudbury to a holding area and are then trucked to the project site,” said Mr. Stret. “Delivery will continue until late November, as each turbine is constructed.”

According to a document from the project, distributed by the Northeast Town council on the delivery of the major wind farm components, there will be 144 loads of towers (including TBRs), 72 loads of blades and 48 loads of machine heads.

The towers are shipped via rail from Trois-Rivieres, Quebec to Sudbury, while the blades come from Brazil via ship to Corpus Christi, Texas where they are then shipped by rail to Sudbury. Finally, the machine heads are also shipped to Sudbury by rail before being trucked to Little Current.

Mr. Stret also explained that the components are tested during installation to ensure that nothing was compromised during the shipping and are scheduled to be fully assembled by mid to late December, followed by a two month testing period and operational by next spring.

In other areas of construction, the submarine cable across the North Channel has been completed and work on the Goat Island switch yard station is ongoing.

“The submarine cable was completed the last week in August,” Mr. Stret said. “It has been tested and the concrete mattress and backfill have been completed. It is also been inspected using underwater cameras and scuba divers.”

“The switch yard station concert work will be complete by the end of the week,” continued Mr. Stret, “followed by backfill and the components arriving by the end of this month.”

Mr. Stret also told The Expositor that the main transformer for the substation in the Green Bush arrived two weeks ago and construction on the pad for the transformer has also begun.