MINDEMOYA—The council chamber in Mindemoya was almost full on April 23 as a public meeting was held for discussion regarding an amendment to zoning bylaw 2015-07. Resident Steven Hill is requesting that land zoned ‘residential hamlet’ in the Anglin subdivision be changed to allow the construction of two six-unit row housing buildings. Mr. Hill was unable to attend the meeting.

Central Manitoulin building inspector Raymond McPherson spoke first at the meeting and outlined the zoning of the area and acknowledged that though the bylaw in place does not allow row housing as it stands, the proposed use is considered to be consistent with the Official Plan for the municipality.

Four letters were received by council concerning the row housing with each party also in attendance at the meeting. Anita Cress wrote in opposition to the request from Mr. Hill as she was worried that it would reduce the value of her property as did Brenda Maurice, Kathy and Willis Hallett and Sherri McDougall. Ms. Maurice informed council that she has lived in the Anglin subdivision for 29 years and is also worried about a safety issue with the proposal as increased traffic would raise concerns for the children in an area with a day care and school. She added that it was always her understanding that this area was for single family dwellings.

“It seems to be all about money for people who don’t live there,” she told council, “and children’s safety comes first, not money.”

The Halletts asserted that they are vehemently opposed to the units and spoke of the drainage issue that has caused problems for many years including water encroaching on their property and that 12 more units will contribute to the problem. The couple remarked that the row houses are not esthetically pleasing and that there will not be any privacy if these buildings are allowed. When Mr. Hallett asked if the row housing would affect the water and sewer system, he was assured by Mayor Stephens that the system is fine with the clerk adding that the system is at 65 to 70 percent capacity. Mr. Hallett also said that apartments should be kept to the south of the town and the single dwelling areas should be left alone.

Ms. McDougall also spoke of the ongoing drainage issues in her subdivision. “I have a river running beside my house,” she told council. “The drainage project they did last year, what has it done? The water cannot run uphill in Anglin subdivision. And our sump pump runs 24 hours a day.”

Councillor Alex Baran spoke at length after hearing the submissions from the residents, saying, “If we look at the history of multi residential areas, you will find that things have gone on well. That things that we feared did not come to fruition.” He explained that even if a single family dwelling went up next to someone, it would infringe on privacy, that he doesn’t believe that anyone’s property values have decreased and that all municipalities, towns and villages, have managed safety issues. Mr. Baran also explained that council looks at population density as a good thing, that the more people that use the water and sewer system, the less we all pay and that bringing in more people is good for retail.

“I believe all your concerns are fixable,” he said and offered to work with Mr. Hill and the residents every step of the way.

The public meeting ended with Mayor Stephens assuring those in attendance that, until the water issue is resolved, council would not be going ahead with an amendment to the bylaw, adding that they were at a disadvantage with Mr. Hill not being at the meeting. 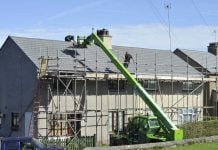 Canada Mortgage briefs Services Board on $15.9B national housing strategy